Forecast and trading signals for GBP/USD for December 3. Detailed analysis of the movement of the pair and trade deals. The 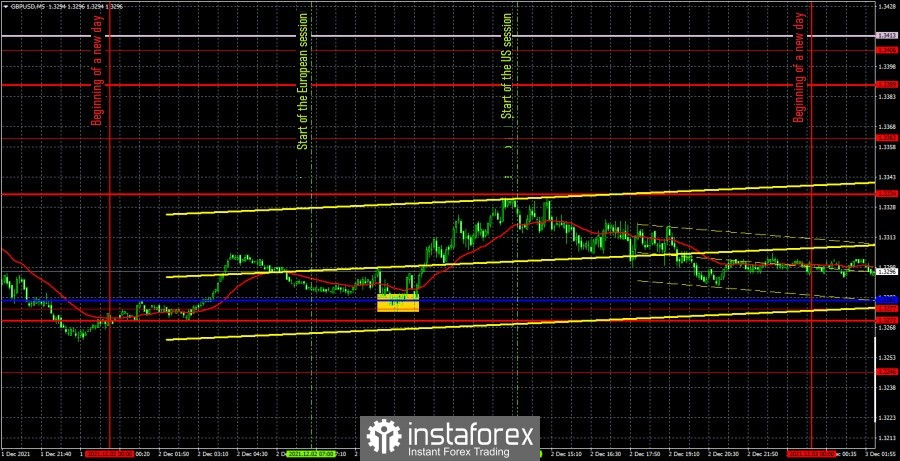 The GBP/USD pair was trading with an upward bias on Thursday. Thus, traders could count on the formation of good and profitable trading signals. Unfortunately, yesterday there was not a single important macroeconomic or fundamental event important for the pound or dollar. Therefore, the volatility remained low during the day - only about 60 points. But with good traffic, this is enough to make money. By and large, only one signal was generated during Thursday. The pair bounced off the critical line and the extremum level of 1.3277 in the middle of the European trading session, thus forming a buy signal, which should have been worked out. Subsequently, the pair grew by 40 points and almost reached the resistance level of 1.3334, to which only 1 point did not reach. However, such a "shortage" can be considered an error. Therefore, a long position should have been closed after a rebound from the level of 1.3334. The profit on it was 30 points. Recall that no trading signals are formed near the support and resistance levels, therefore, the pair should not have been sold near the level of 1.3334. In total, one signal was formed during Thursday. In general, the pound/dollar pair continues to try to correct after a rather long fall. So far, however, little has come of it. 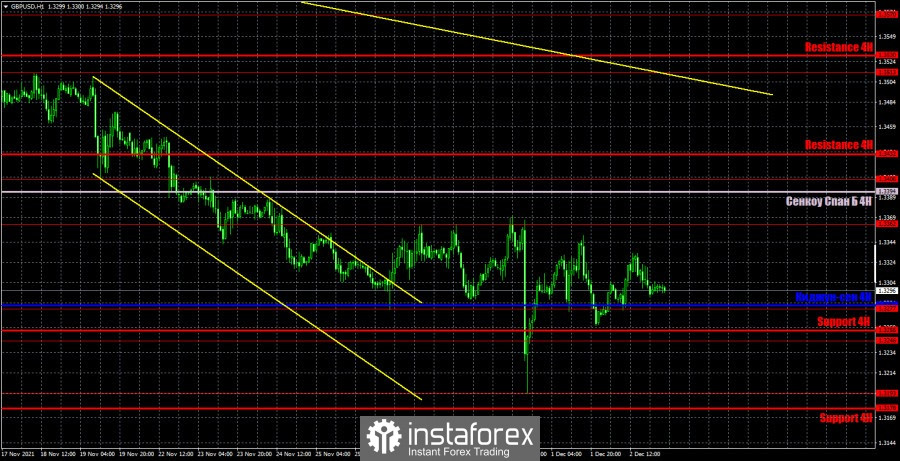 On the hourly timeframe, the pound/dollar pair continues to move with a slight downward bias. But on the whole, the downward trend is still evident and beyond doubt. The downward trend line has been maintained for one and a half months, all this time the pound, accordingly, has been falling. At this time, the pair is just above the critical line, so this rather strong line restrains it from further falling. However, the pound cannot find reasons for growth even when there is no reason for a new fall. So far, we do not see how the pair can start a medium-term upward trend. We distinguish the following important levels on December 3: 1.3193, 1.3246, 1.3277, 1.3362, 1.3406. Senkou Span B (1.3394) and Kijun-sen (1.3281) lines can also be signal sources. Signals can be "rebounds" and "breakthroughs" of these levels and lines. It is recommended to set the Stop Loss level at breakeven when the price passes 20 points in the right direction. The Ichimoku indicator lines can move during the day, which should be taken into account when looking for trading signals. The UK will publish only the PMI in the services sector on Friday. Not the most important report, the minimum likelihood of market reaction to it. There will be many more important events in the United States. Only the NonFarm Payrolls report is worth it! And besides that, traders should pay attention to unemployment reports, wages and business activity indices in the service sector.

Overview of the EUR/USD pair. December 3. The omicron strain - all over again... There is no exact information, but the whole world is in a panic.

Forecast and trading signals for EUR/USD for December 3. Detailed analysis of the movement of the pair and trade deals. 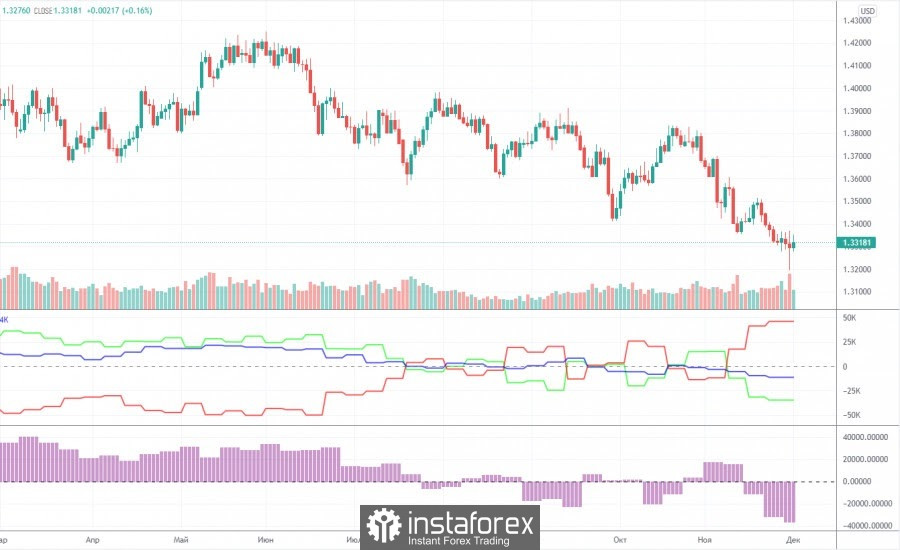 The mood of professional traders practically did not change during the last reporting week (November 16-22). During the entire week, a little more than a thousand buy contracts (longs) were closed and about 3,000 sell contracts (shorts) were opened by a group of "non-commercial" traders. Thus, their net position decreased by 4,000 contracts, which is not much even for the pound. The overall picture of the situation does not change at all. The first indicator in the chart above continues to display all the changes in the mood of non-commercial (green line) and commercial (red line) traders. As you can see, the mood is constantly changing and it started around the month of July. Since then, the players can't decide what to do with the pound at all? Despite the fact that the British currency has been declining all this time, we still cannot make a long-term forecast, as the mood of professional traders is constantly changing. For example, at this time, the green and red lines are quite significantly distanced from each other. About the same as in March or June, when a long uptrend ended. However, then the long upward trend ended, and now we are talking about a downward correction. Of course, it may also be nearing its completion, but doubts about the indications of the Commitment of Traders (COT) reports still remain. However, at the same time, it cannot be said that the mood of professional traders is definitely bearish now, since they have almost twice as many sell contracts open as buy contracts. But the very nature of the pair's movement in 2021 does not allow us to assume that after the pound falls by 600 points, this process will continue without an upward pullback.

Interesting? Write a comment below.
 Forecast and trading signals for GBP/USD for December 3. Detailed analysis of the movement of the pair and trade deals. The
Forward 
Backward 