Forecast and trading signals for GBP/USD for December 7. Detailed analysis of the movement of the pair and trade deals. The 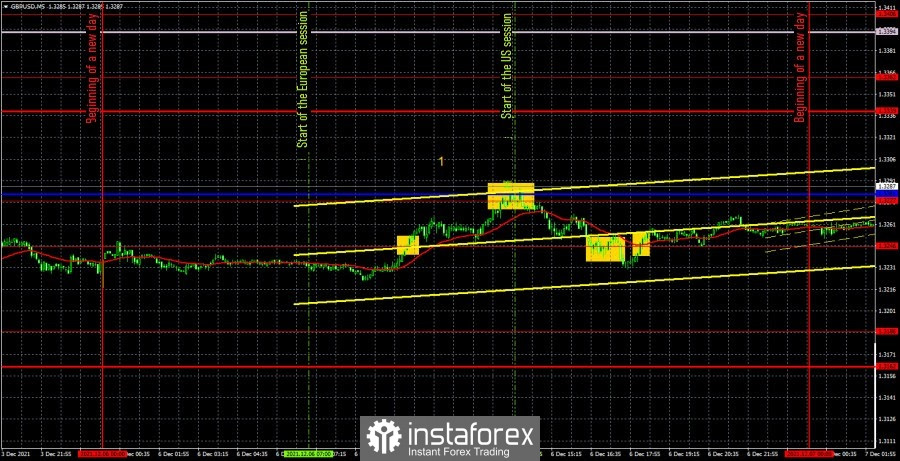 The GBP/USD pair was also trading without a definite direction and also with low volatility on Monday. Thus, the movements were not the most successful, nevertheless, the signals that were formed during the day still turned out to be quite good. Before we begin to analyze it, it should be noted that the only report of the day - the index of business activity in the UK construction sector - was published in the middle of the European session (figure "1" in the chart) and did not affect the course of trading in any way. Although the indicator itself turned out to be higher than forecasts and could help the British currency a bit. The first buy signal was formed in the morning when the pair overcame the extreme level of 1.3246. Here, traders had to open long positions. The nearest target - 1.3277 was reached and a rebound followed from it, which became a signal to close long positions and open short ones. The profit was 11 points, and on the second signal, the short position should have been kept open until the evening. The shorts should be closed manually only when the pair settled above the level of 1.3246. The profit on this transaction was another 11 points. It was no longer necessary to open deals at the last buy signal, since it was formed too late. As a result, 22 points of profit. Not so bad for a "boring Monday." 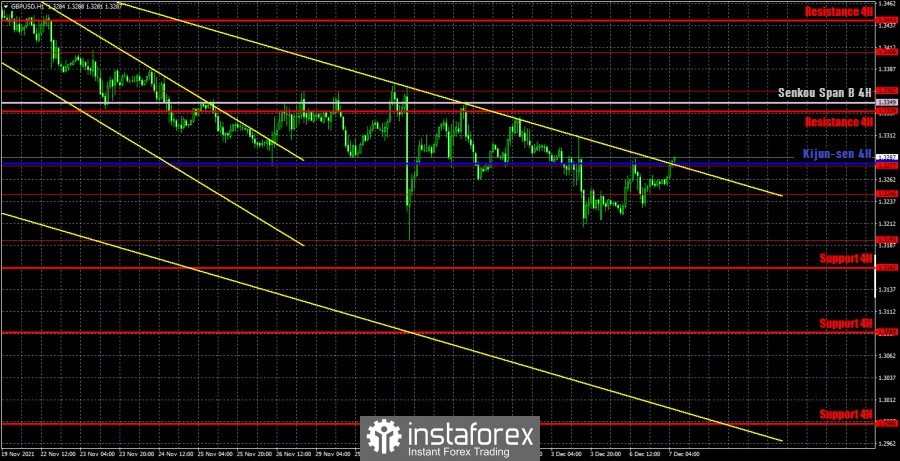 The pound/dollar pair also continues its downward movement on the hourly timeframe, which is clearly visible. It is especially clear how the price has already bounced 4 or 5 times from the new descending channel that we formed instead of the trend line. Thus, in the near future, as in the case of the euro/dollar pair, the channel may be overcome, which will lead to a change in the upward trend. However, until this happens, it is clearly not worth buying the pair. Moreover, now its quotes continue to remain below the Kijun-sen and Senkou Span B lines of the Ichimoku indicator. We highlight the following important levels on December 7: 1,3193, 1,3246, 1,3277, 1,3362, 1,3406. The Senkou Span B (1.3349) and Kijun-sen (1.3281) lines can also be signal sources. Signals can be "rebounds" and "breakthroughs" of these levels and lines. It is recommended to set the Stop Loss level to breakeven when the price passes in the right direction by 20 points. The lines of the Ichimoku indicator can move during the day, which should be taken into account when searching for trading signals. There won't be a single important report or event in the UK on Tuesday. The same is true in the US. Thus, the fundamental and macroeconomic background will simply be absent today. Therefore, volatility may remain low, and trend movement may be absent. On the other hand, if the trend is still present, it will eloquently say that the markets do not need statistics and news now. They have a strategy and they will stick to it.

Overview of the EUR/USD pair. December 7. US inflation is an important and practically the only event of the week.

Overview of the GBP/USD pair. December 7. All the fun is scheduled for Friday.

Forecast and trading signals for EUR/USD for December 7. Detailed analysis of the movement of the pair and trade deals. 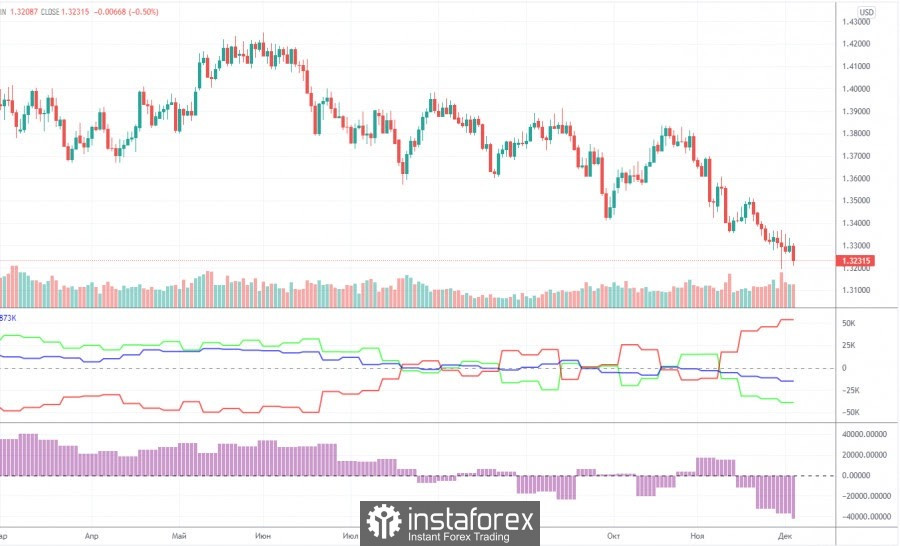 The mood of professional traders became a little more bearish during the last reporting week (November 23-29). In principle, quite unexpectedly, the bears became almost twice as strong as the bulls. Recall that since about August, the bulls and bears could not decide who to dominate the market. This is clearly seen by the two indicators in the chart above: the net position of the "non-commercial" group was constantly jumping from side to side. However, in the last few weeks, professional traders have increased the number of shorts to 93,000, and the number of longs has remained at 51,000. Thus, at this time, the mood can really be described as bearish. Consequently, it can be concluded that the pound will continue to fall. However, as always, it does not do without one "but". The red and green lines of the first indicator, which indicate the net positions of commercial and non-commercial traders, the two most important and large groups, have moved quite far from each other. They were at about the same distance in May-June, when the upward trend ended. And a strong distance from each other of these two lines just means that the trend may end. Of course, if the demand for the dollar does not decline, and there is still the same negative fundamental background in the UK, then nothing will prevent the US currency from continuing to grow. However, a further fall in the pound will mean that the number of shorts will continue to grow. And it already exceeds the number of longs by almost twice.

Interesting? Write a comment below.
 Forecast and trading signals for GBP/USD for December 7. Detailed analysis of the movement of the pair and trade deals. The
Forward 
Backward 