Fundamental analysis of GBP/USD for December 7, 2021 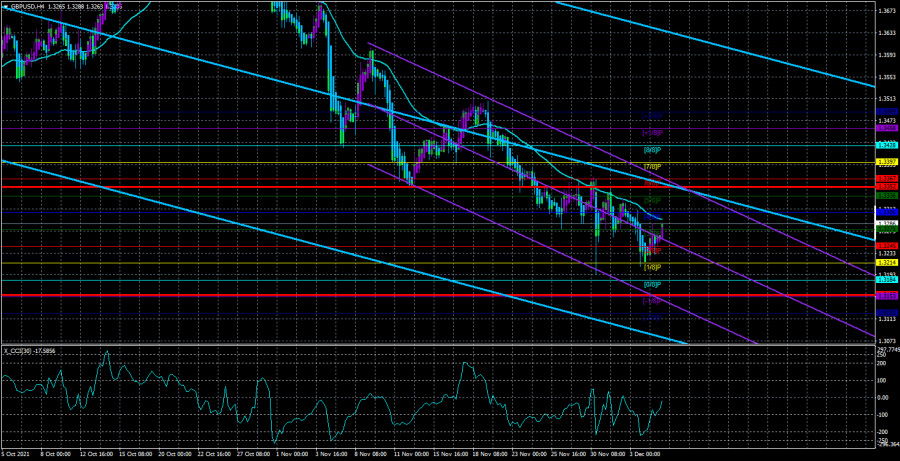 The GBP/USD pair continues its slow but steady downward movement. The pair keeps trading lower, both Linear Regression Channels are headed down. So far, there has been no sign of an upward reversal, which indicates the continuation of the downtrend. Unlike the euro, the pound sterling went down on Friday. At the same time, taking into account the fact that the central report of the day came worse than expected, the pair's Friday fall could hardly be defined. So, the sterling that was reluctant to drop sharply versus the dollar in 2021 started to make up for the lost time. The 1.3162 mark is seen as the important 38.2% Fibonacci level on the H24 chart. Of course, it does not mean that the price will definitely rebound from it. Nevertheless, the pair has been bearish for a long time so that an upward correction could emerge. Above all else, this level is one of the strongest Fibonacci levels. Moreover, the H24 chart is a strong time frame as well. That is why the uptrend may well resume this week. At the same time, if there is no demand for the pound or the volume of short positions decreases, the uptrend is unlikely to resume. Besides, the pair's every bearish movement this year ended with a rebound, which also indicates the possibility of the uptrend. Anyway, there have been no signs of a reversal so far.

Although this week's macroeconomic calendar is almost empty, it does not mean that the week will be uneventful at all. Like the eurozone, the United Kingdom is not going to present any important macroeconomic data this week. The only reports investors could focus on will be GDP and industrial production scheduled for Friday. The market is expected to show no reaction to the results. So, traders will have to focus their attention this week only on fundamentals and macroeconomic data from the United States. Since the Federal Reserve will announce the outcome of the last meeting of the year next week, neither Chair Powell nor his colleagues are going to make any statement this week. As a result, traders will pay attention only to macroeconomic statistics. However, the macroeconomic calendar in the US will also be almost empty. Inflation will be the only important report published this week. Therefore, if the pair extends its downward movement until inflation data is released, the market will remain bearish. At the same time, markets expect the Federal Reserve to announce monetary policy tightening. Indeed, it has been the driving force behind a stronger dollar for months. Generally speaking, this is going to be a rather calm and uneventful trading week in the market. Nevertheless, there could be other important events this week.

After all, the UK remains a source of negative news. London has recently been involved in at least two conflicts. Firstly, the UK demanded to fundamentally change the Northern Ireland Protocol. Secondly, the country turned down over 100 licenses to French boats for its territorial waters. Lastly, Prime Minister Boris Johnson suggested Emmanuel Macron take back all migrants who cross the Channel to the UK. Therefore, more news could come from London or about it this week. 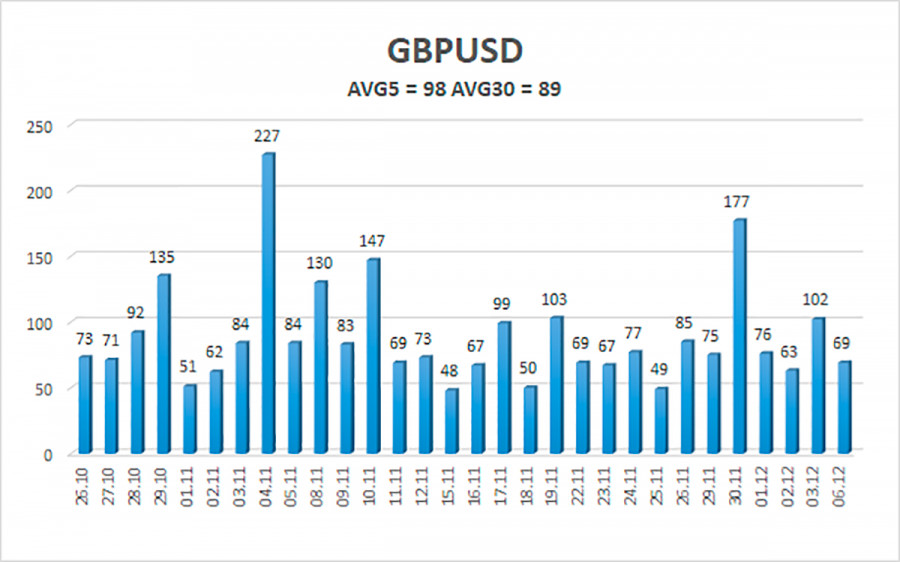 On December 7, GBP/USD volatility totals 98 pips. Today, the pair is expected to move within the channel in the range of 1.3157 and 1.3352. Heiken Ashi's reversal is likely to indicate a possible resumption of the downtrend.

Linear Regression Channels help identify the current trend. If both channels move in the same direction, the trend is strong.

Murray levels are target levels for trends and corrections.

Volatility levels (red lines) reflect a possible price channel the pair is likely to trade in within the day based on the current volatility indicators.

CCI indicator: when the indicator is in the oversold area (below 250) or in the overbought area (above 250), it means that a trend reversal is likely to occur soon.