GBP/USD analysis on December 6. On December 10, relations between London and Paris may become even more strained 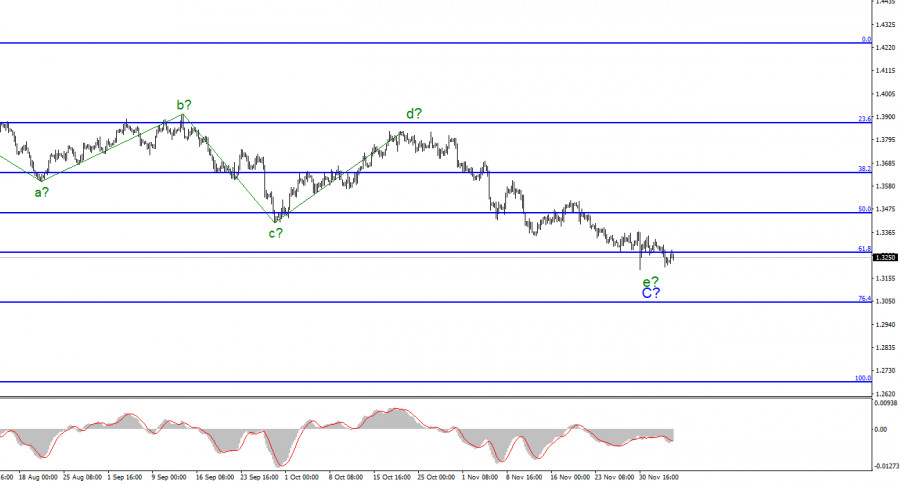 According to the GBP/USD instrument, the wave pattern looks further complicated, though pretty convincing. Five internal waves are visible within the last C wave, and each subsequent wave is approximately equal to the previous one. However, since all the waves within the C or A are almost equal in size, the last wave e may be nearing its completion or already completed. Nevertheless, the decrease in the pound quotations within the last few days caused the e-wave in C to take a more extended form. The whole descending part of the trend might take a more extended form as well. However, it is a contingency. So far, I expect wave e to complete its construction and the entire downward section. Besides, I also admit that the news background does not favour the pound now. Therefore, this factor may cause more sell-offs of the instrument. However, until the low of November 30 is broken, there are still hopes that the e-wave in the C is finished. Though, if EUR/USD will make one more downward wave, GBP/USD will have to form something similar.

Paris issued an ultimatum to London, which expires on December 10.

The GBP/USD instrument rate lost about 70 basis points during Friday and Monday. Thus, the decline of the British pound continues. However, the pound may be hit at least twice this week. Firstly, the report on the US inflation rate will be released on Friday. Moreover, inflation may rise again and cause new dollar's purchases by the market. Secondly, the ultimatum, which Paris delivered to London, expires on Friday. Evidently, it concerns the same fish dispute. The EU media say that Paris insists on issuing about 150 more licenses for fishing in British waters to French vessels.

France states that it has the right to make a demand for these licenses according to the Brexit agreement. If London does not issue licenses, Paris promises to impose sanctions. In particular, they may include tightening control over the import of any goods coming from the UK through French ports to the European Union, cutting off electricity to the Channel Islands, which are de facto British, the ban on the unloading of fish and seafood in French ports. The situation is exacerbated by the conflict over illegal migrants who cross the Channel from France to the UK and do not always get to their final destination. Besides, the French coast guard often has to rescue the hapless migrants. The UK is not satisfied with France's actions and considers that France could maintain better control of the migrants.

The wave pattern of the GBP/USD instrument looks pretty convincing now. The anticipated wave e may be complete. Therefore, currently, I would recommend buying the instrument with the expectation of forming a new trend section in the near future. However, at the moment the instrument quotations fell below 1.3271, thus I suggest postponing the purchases. 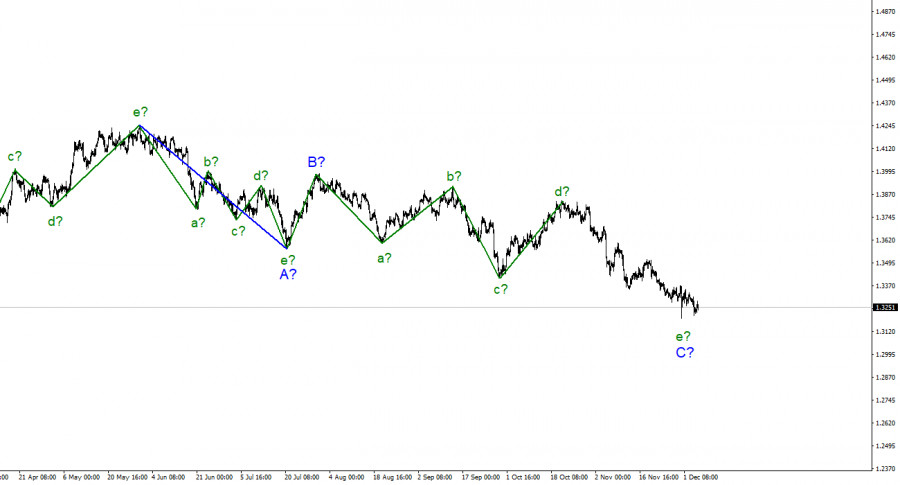 Since January 6, the downward trend section has been forming. Besides, it can be almost any size and of any length. At the moment, the supposed wave C may be almost completed, but there is no clear evidence about it yet. The whole downtrend section may lengthen, though there are no signals about it yet either.

Interesting? Write a comment below.
 GBP/USD analysis on December 6. On December 10, relations between London and Paris may become even more strained
Forward 
Backward 