GBP/USD analysis on December 8. Boris Johnson: the Omicron strain is more contagious than the Delta strain. 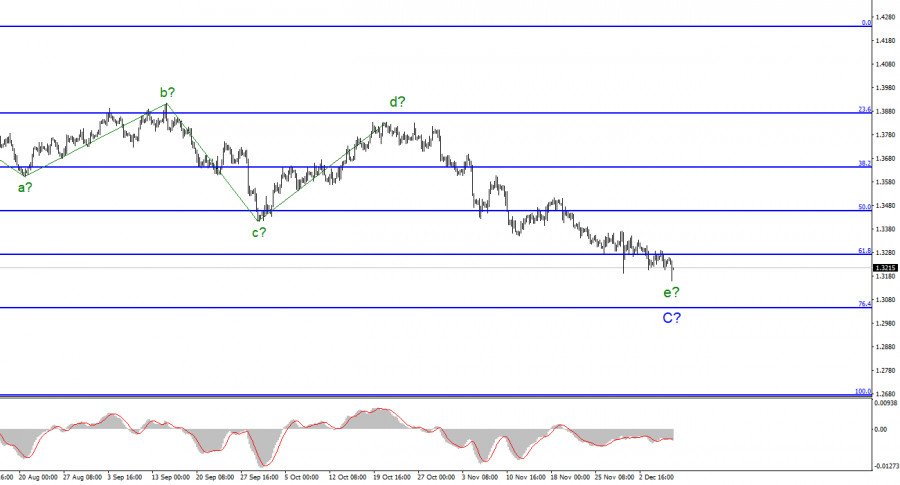 For the pound/dollar instrument, the wave marking continues to look quite complicated, but at the same time, quite convincing. If the current wave pattern is correct, then the construction of the last wave in the composition of C is now continuing. The decline in the quotes of the British dollar in recent days leads me to think that the wave e and C may take a longer form than I expected earlier. Accordingly, the entire downward section of the trend will take a more extended form. But I still expect that wave e will complete its construction in the near future, and the entire descending section. But I also admit that the news background is not on the side of the pound right now. Thus, this factor can cause all new sales of the instrument. The low of November 30 was broken today and wave e is getting more complicated. I am waiting for the EUR/USD instrument to build another downward wave, so the GBP/USD instrument can continue building an elongated wave e at this time.

The British Prime Minister recognizes the danger of the Omicron strain.

The exchange rate of the pound/dollar instrument decreased by another 35-40 basis points during Wednesday. Thus, the construction of a downward wave continues with targets located near the 1.3050 mark. I have already said in my recent reviews that it is very difficult for the British to find market support now because the news background remains quite difficult and negative for them. If desired, you can always find at least a spoonful of honey, but now this spoon does not save the pound. The situation with the pandemic is getting worse in the UK, and Boris Johnson is tightening the rules of entry into the country for foreigners, as well as quarantine rules for all arrivals. In addition, in the country again, the entire population must wear medical masks in all crowded places. The British Prime Minister also said that the Omicron strain could be more contagious than the Delta strain, hinting that it could cause new damage to the British economy. As of December 8, 350 infections with the Omicron strain have already been recorded in Britain, and this figure is growing every day. Probably, we can expect a "South African scenario", where the Omicron strain is already the most common. British media also report that so far there has been no talk in Parliament about the use of a "plan B" to contain the current wave of a pandemic or a new strain. Boris Johnson believes that it is too early to conclude the new virus. For now, I can note that Britain continues to be a supplier of negative information that puts pressure on the British currency, reducing demand for it. Tomorrow, the news background in the UK and the US will remain extremely weak. There are no reports that could change the mood in the market.

The wave pattern of the pound/dollar instrument looks quite convincing now. The supposed wave e resumed its construction. Thus, now I would advise you to wait for new "up" signals, which can be formed in case of an unsuccessful attempt to break through the 1.3046 mark, which corresponds to 76.4% Fibonacci, or in case of a successful attempt to break through the 1.3273 mark, which equates to 61.8% Fibonacci. 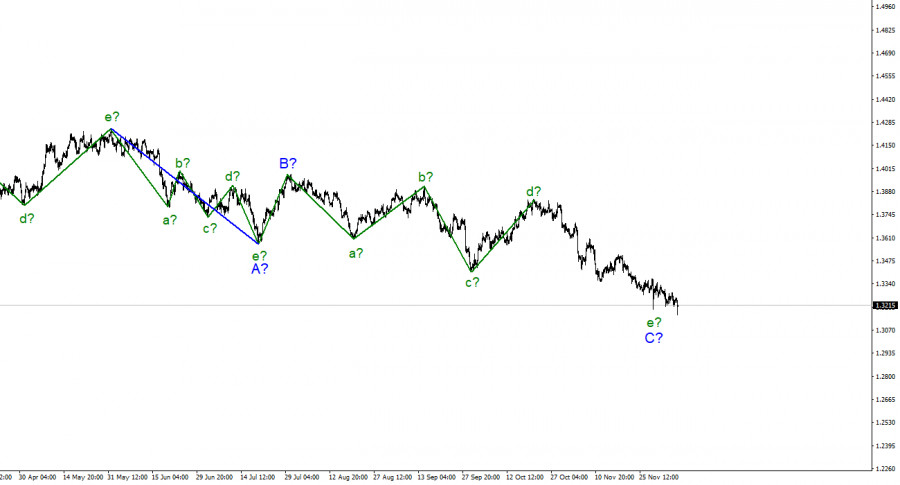 Starting from January 6, the construction of a downward trend section continues, which can turn out to be almost any size and any length. At this time, the proposed wave C may be nearing its completion (or completed), but there is no unambiguous confirmation of this yet. The entire downward section of the trend may lengthen more than once.