GBP/USD: plan for the European session on December 13. COT reports. The pound has every chance of strong growth

Several good signals to enter the market were formed last Friday. Let's take a look at the 5 minute chart and understand the entry points. In my morning forecast, I paid attention to the 1.3205 level and advised you to make decisions on entering the market. It is clear that after the release of a number of UK reports, and there were quite a few of them: from changes in GDP and industrial production to the service sector activity index, bulls did not manage to find the strength to defend support at 1.3205. As a result of such failure and the reverse test from the bottom up, an excellent signal to open short positions was formed, which brought about 20 points of profit. However, a larger drop in the pound never took place. The US inflation data came as no surprise to traders. A sharp rise in the pair in the afternoon and a false breakout at 1.3237 led to a sell signal. The downward movement made about 30 points to the support area of 1.3205, after which, once again protecting this level, the bulls formed a false breakout and a signal to buy the pound. The upward movement was more than 70 points. 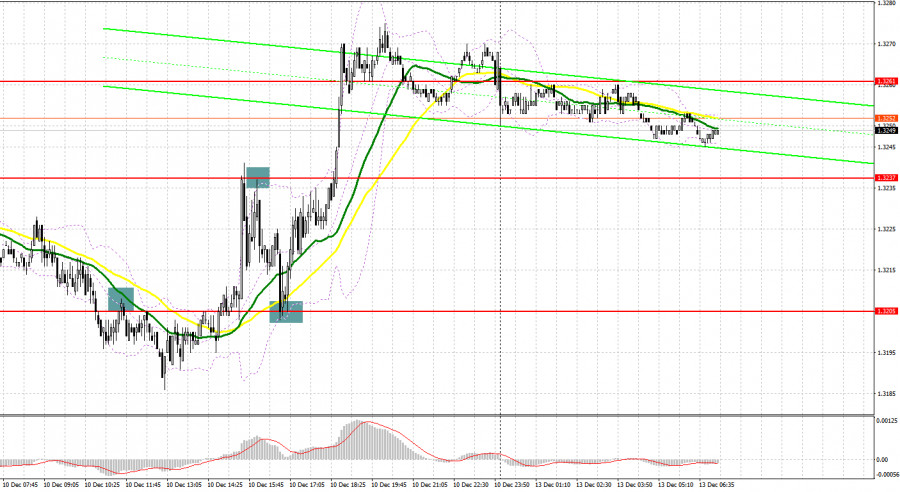 Today there is another series of data on the UK economy. I advise you to read the report on financial stability of the Bank of England, as well as listen to the interview of the BoE Governor Andrew Bailey, which can play an important role in the British pound's succeeding direction. But given that all this will be in the afternoon, the bulls will probably try to keep the market under their control during the European session. This can be done only if a false breakout is formed in the 1.3236 area, where the moving averages are, playing on the side of bulls. In this case, the pound will rise and there will be another test of resistance at 1.3267, above which it was not possible to get out on Friday. Updating 1.3267 from top to bottom will provide another entry point for buying GBP/USD with the prospect of a breakthrough of 1.3297 closer to the afternoon. A breakdown of this range will also open the possibility of renewing a high like 1.3329, where I recommend taking profits. The next target is the resistance at 1.3368. Bulls will have problems again in case the pound falls during the European session and traders are not active at 1.3236. For this reason, I advise you not to rush into long positions. Only the formation of a false breakout near the next low at 1.3207 will provide an entry point for long positions. This level is very important from a technical point of view, as its breakthrough will negate all bulls' efforts to build an upward correction in the pair. It is possible to buy GBP/USD immediately on a rebound in the area of 1.3173, or even lower - from 1.3144, counting on a correction of 20-25 points within the day.

All the bears need now is to protect the level of 1.3267, above which the pound should not be allowed in any way, since its breakdown will lead to the demolition of a number of stop orders and a more active recovery of the pair with the prospect of a reversal of the downward trend. Forming a false breakout at 1.3267 will lead to creating a good entry point into short positions with a subsequent decline in the pair to the 1.3236 area - a kind of middle of a new horizontal channel. An active struggle will unfold for this level, since there are moving averages playing on the side of bulls. The breakdown of 1.3236 will create new problems for the bulls and keep the pair in the descending channel. A reverse test of this range from the bottom up will provide an excellent entry point, which will push GBP/USD to the lows of 1.3207 and 1.3173, where I recommend taking profits. The next target will be the support at 1.3144, but we are unlikely to fall to it at the beginning of this week. In case the pair grows during the European session and bears are weak at 1.3267, it is best to postpone selling until the larger resistance at 1.3297. I also recommend opening short positions there only in case of a false breakout. Selling GBP/USD immediately on a rebound is possible only from a large resistance at 1.3329, or even higher - from a new high in the 1.3368 area, counting on the pair's rebound down by 20-25 points within the day. 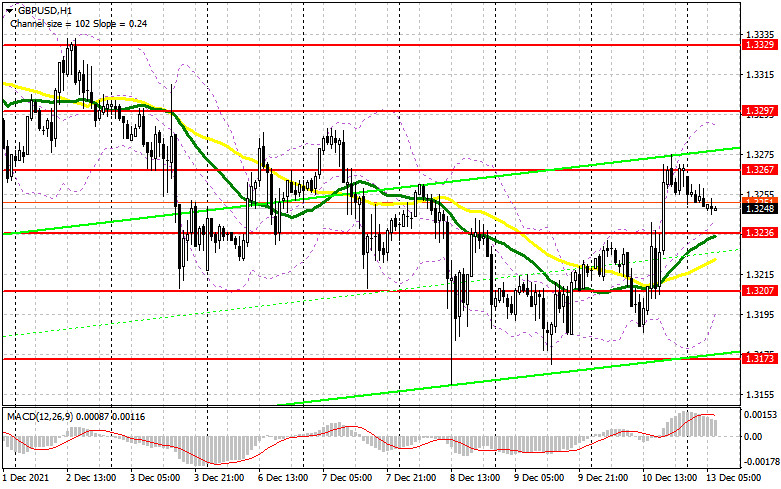 The Commitment of Traders (COT) reports for November 30 revealed that both short positions and long positions increased. However, there were more of the latter, which led to an increase in the negative delta. Last week there was very little fundamental statistics on the UK economy, and all the speeches of Bank of England Governor Andrew Bailey were dovish, which did not give traders confidence in the future of the British pound. And if the representatives of the BoE preferred to take a more wait-and-see attitude, then the speeches of Federal Reserve Chairman Jerome Powell, on the contrary, were of a hawkish character. In his comments, he spoke quite a lot about the expected changes in monetary policy towards tightening. The reason for this is rather high inflation, which has grown from "temporary" to permanent, which creates many problems for the central bank. An equally serious problem for the UK is the new Omicron coronavirus strain, which could lead to another lockdown and the country's quarantine. So far, the authorities have to closely monitor the development of the situation with the new strain, which negatively affects the economy at the end of this year. Let me remind you that the Fed will hold a meeting next week, at which a decision on the bond purchase program will be made, so demand for the US dollar is expected to remain in the shorter term. The COT report indicated that long non-commercial positions rose from 50,122 to 52,099, while short non-commercials increased from 84,701 to 90,998. This led to an increase in the negative non-commercial net position: delta was -38,899 against -34,579 a week earlier. The weekly closing price dropped from 1.3397 to 1.3314.

Trading is carried out higher in the area of 30 and 50 moving averages, which indicates an attempt by the bulls to pull the market to their side again.

Interesting? Write a comment below.
 GBP/USD: plan for the European session on December 13. COT reports. The pound has every chance of strong growth
Forward 
Backward 