GBP/USD analysis on the daily chart 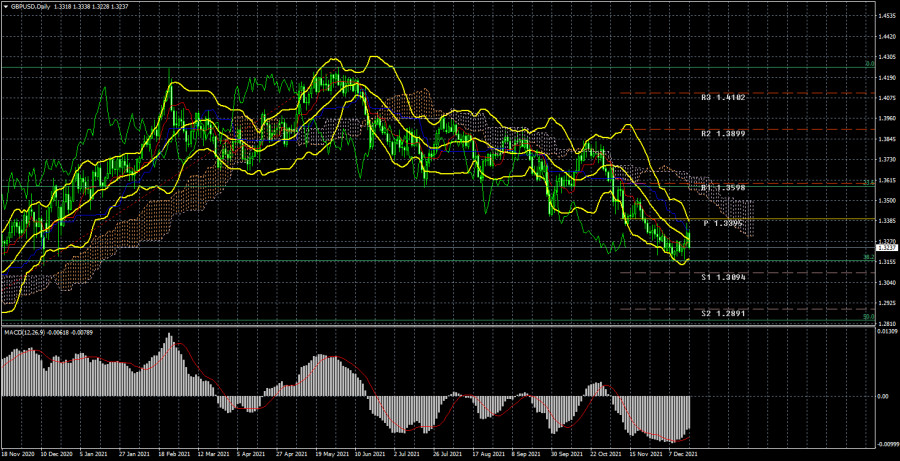 The GBP/USD pair during the current week corrected to the critical line on the daily chart. Thus, the correction was formally started, if not for the fall on Friday. It turns out that the pair performed just a perfect rebound from the Kijun-Sen line and now it can continue the downtrend. Although, the pound has much less reasons to fall than the euro. The Bank of England unexpectedly decided to raise its key rate by 0.15% this week. Thus, the regulator was the first of the three central banks, which increased the rate. From my point of view, this is indeed a hawkish move and the pound sterling was quite reasonably expensive on Thursday. However, the bulls nevertheless couldn't keep the initiative in their hands on Friday, because Fed's decisions also can be called hawkish, and on Wednesday markets didn't consider it necessary to buy the US dollar. Thus, Friday's rise of USD is a repayment of Wednesday's debt. As for the technical picture, during the current week it virtually has not changed. The downtrend is still visible to the naked eye. The pair did not manage to break through the Kijun-sen line even when there were reasons to do so. Thus, the pound also does not show any signals for growth. Though earlier the pair rebounded from the important 38.2% Fibonacci level on the daily chart, so the pair is expected to grow. On the other hand, a breakout of this level may pave the way to 1.2891 and 1.2828 (50.0% Fibonacci). 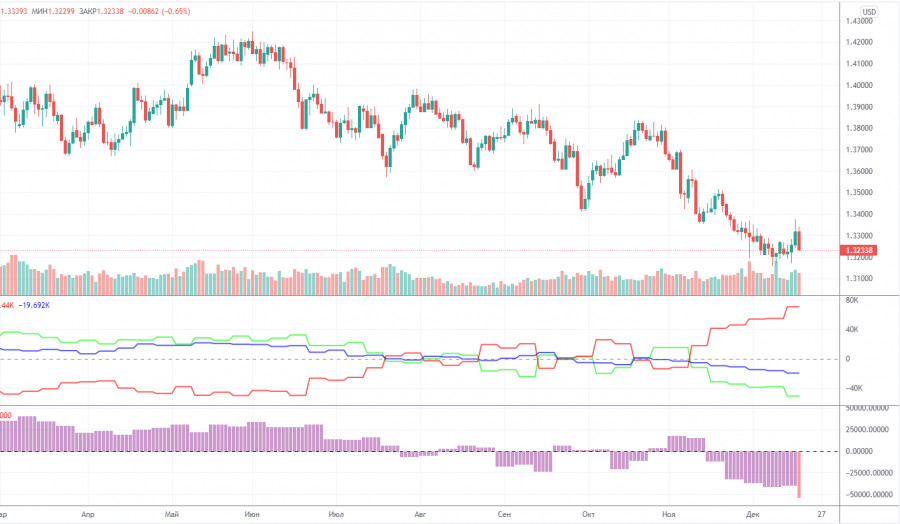 During the last reporting week (December 7 - 13) professional traders' sentiment became more bearish. Professional traders closed 6,700 sell contracts and 20,100 buy contracts during the week. Thus, the net position of Non-commercial traders decreased by 13,400 contracts, which is a lot for the pound. Thus, unlike the euro, the pound, according to the COT reports, continues to fall quite justifiably: the big players continue to sell it off. However, the green and red lines of the first indicator (which mean the net positions of "Non-commercial" and "Commercial" groups) have already moved away from each other. This signals the imminent end of the current trend. However, as in the case with any fundamental assumptions, this hypothesis requires specific technical signals we do not have at the moment. If we do not take into account the increase of the key rate by the Bank of England, then there are no particular fundamental reasons for the growth of the pound at the moment, either. Boris Johnson continues to fall into various scandals, and there are rumors that he may leave his post before the end of the due term. The pandemic in the UK is gaining momentum and the other day an anti-record was set for the daily record-high number of cases. Omicron is also spreading quite rapidly across the country, posing additional risks to the health system and the economy. London, on the other hand, cannot find common ground with Paris and Brussels, which threatens to damage relations with its closest neighbors and lose markets for its products. Unfortunately, there is no positive news yet.

This week the economic data was quite strong in the UK. Unemployment rate declined to 4.2% from 4.3%, wages rose more than expected, claims for unemployment benefits decreased more than expected too, consumer price index grew to 5.1% yoy, retail sales also exceeded market expectations. Only the index of business activity in the service sector did not make traders happy, as it decreased in December, which is not really surprising, as restrictive measures were toughened in the country, and COVID-19 situation does not suggest anything else. Thus, the pound had macroeconomic reasons to grow this week, but as we can see, by the end of the week it fell by 34 points. Thus, the markets still pay more attention to the fundamental background from other countries, which is also quite strong. Market participants still believe that the factor of QE program winding down and increase of rates by the Fed two or three times next year is the most important and significant.

1) The pound/dollar pair maintains a downtrend. Therefore, buying is still not relevant now. We need to wait for the pair to consolidate above the critical line, and even better - above the Ichimoku cloud. We still believe that the pair may go up by 400-500 pips within the next month, but market participants are not willing to buy the pound yet.

2) Bears continue to hold the pair below the critical line. Support levels of 1.3094 and 1.2891 are the targets for further downtrend now. This week correction to the critical line has taken place, so now nothing prevents the pair from resuming the fall. Especially, taking into account the rebound from the Kijun-sen line.

Description of the charts:

Price levels of support and resistance (resistance/support), Fibonacci levels - levels, which are the targets for the opening of long or short positions. Traders may place take-profit orders near these levels.

Indicator 1 on the COT charts - the size of the net position of each category of traders.

Indicator 2 on the COT charts - the size of the net position for the "Non-commercial" group.