Omicron strain is not that terrible, a wave of optimism can form. Overview of the currency market

It seems that the panic wave provoked by the appearance of a new strain of coronavirus is already close to a climax and will fade soon. In favor of such a scenario, the latest news from COVID-19 and the results of the OPEC + meeting, at which it was decided not to change the previously agreed strategy, which indirectly indicates that OPEC+ does not see a threat from Omicron.

Statistically, WHO does not yet have confirmed cases of severe cases caused by the new strain, most cases are "lighter" than Delta, and there is no evidence yet that the vaccines used are losing their effectiveness. Australia's chief medical officer Paul Kelly said there are signs that Omicron is no more dangerous than Delta. At the same time, Israeli Health Minister Nitzan Horowitz sees signs that vaccinated with a valid vaccine will also be protected from this option. The news comes entirely soothing, so the panic wave has clearly stalled.

If Omicron causes less severe diseases than Delta, then it means only one thing in the end – the growing probability that COVID-19 will finally end next year or the virus will degenerate into a normal seasonal disease without serious consequences, which means there will be no reason to support most anti-covid measures. As soon as this news is fully realized by the market, it will lead to a sharp increase in demand for risk and explosive growth of the global economy. Most countries have already come close to the hypothetical level of "collective immunity", that is, the vaccination factor ceases to affect market expectations, and the factor of a weaker strain, excluding severe disease, becomes dominant. 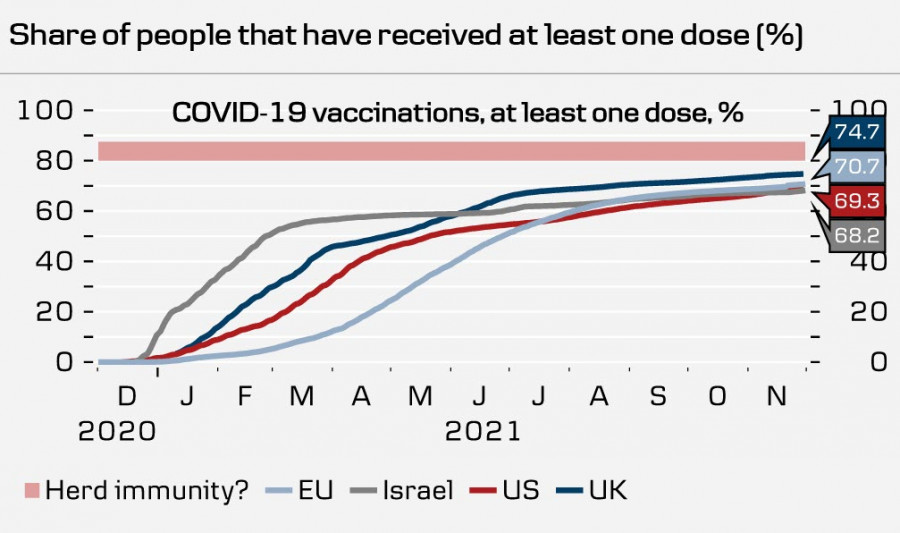 The decision of OPEC+ to adhere to the previously adopted strategy and increase production in January by the planned 400 thousand barrels a month ago is also a sign of a growing interest in risk. Fears that oil will go below $ 65/bbl are unlikely to be implemented, as it shows that the alliance sees no reason to be afraid of a new strain of COVID-19, and this is a good sign for the markets. OPEC+ assumes that global oil demand will continue to grow, which means it considers the crisis recovery scenario a priority, which is a frankly bullish signal for the players.

Over the past day, the expectations for the US Federal Reserve rate have also changed to a more hawkish side. The speeches on Wednesday by several Fed members were very similar, market expectations for the first increase in the rate in May 2022 shifted from 86% to 95%. However, it might be too early to draw final conclusions.

The publication of inflation data for November may surprise the bulls. Looking at the yield of inflation-protected TIPS bonds, it can be seen that it peaked on November 15, and since last Friday, it has fallen quite a lot, that is, business is afraid of a new wave of crisis and has not yet changed its mindset to a more optimistic one due to the lesser danger of Omicron. 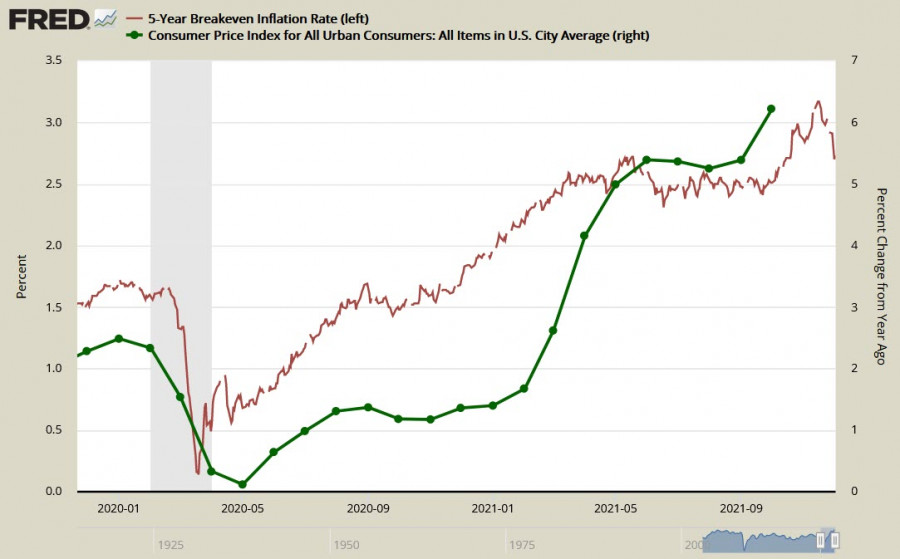 Apparently, the point is that Omicron will not have a negative impact on the pace of normalization of monetary policy by world central banks. If this is the case, then we should expect a return of interest in risk in the coming days.

The publication of the US employment report for November today will most likely not have a strong impact on the markets unless the final data radically diverge from the forecasts, since the traders' attention is now primarily occupied with news about Omicron.

It is expected that the report will come out quite strong. A similar report will be published for Canada, which in the end may cause strong volatility of the USD/CAD. After that, the ISM for the services sector will be published. It is expected that the growth rate in the sector will slightly fall from 66.7 to 65p, but will remain very high, which will also give additional reasons to the dollar bulls.

It can be assumed that the closing of the week will be positive. The USD/JPY pair will close above the current level and may reach 113.60/70. Oil will trade with an increase, which will form a stable basis for commodity currencies.

Interesting? Write a comment below.
 a wave of optimism can form. Overview of the currency market, Omicron strain is not that terrible
Forward 
Backward 