Overview of the EUR/USD pair. December 10. Americans are waiting for the deterioration of the economic situation. 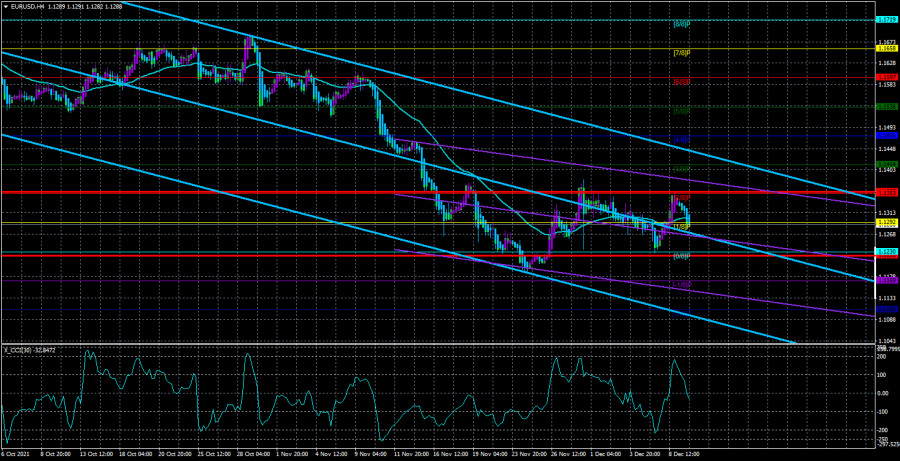 The EUR/USD currency pair has consolidated back below the moving average. However, in recent days, it has been tightly stuck between the Murray levels "0/8" - 1.1230 and "2/8" - 1.1353. Thus, we got a 120-point side channel on a 4-hour timeframe. At the same time, both linear regression channels are still directed downward, so the downward trend remains in force. Therefore, it is still more expedient to sell the pair. Moreover, the last week showed: bulls don't have enough strength to break the downward trend. Also, the last week showed that the markets, in principle, cannot find the necessary grounds for purchases of the EU currency. In recent articles, we have already listed those factors that presumably allow the dollar to hold as high as it is now. From our point of view, the main factor among them is the difference in market expectations between changes in the monetary policy of the Fed and the monetary policy of the ECB. In other words, the markets are waiting for tightening from the Fed and do not expect such from the ECB. Naturally, against this background, the US currency continues to be in demand. However, as in the case of stock indices, which so far ignore the fact that the process of tightening monetary policy has already begun, the growth of the US currency can be deceptive. We expected the downward trend to end a few months ago. Now it can also end at any moment simply because the markets have been buying the dollar exclusively on expectations for quite a long period. It turns out "bitcoin-like growth". Consequently, as soon as the markets fully play out the factor of Fed tightening, the dollar may begin to fall. But, on the other hand, since there are no technical buy signals right now, therefore it makes no sense to rush to buy a pair.

Americans do not approve of Joe Biden and believe that the economic situation will get worse.

Since the fundamental background was completely absent on Thursday and there was not a single important and interesting event during the day, let's look at the results of the latest poll by The Wall Street Journal concerning the US economy and politics. So, according to the study, 61% of respondents believe that the States are going the wrong way, and 47% believe that the economic situation will worsen in 2022. Only 41% of respondents rate Joe Biden's work positively, and 57% negatively. Thus, President Biden's ratings are now even lower than Donald Trump's at the time. All this is very bad for the Democratic Party since midterm elections to the Senate and Congress will be held next year. And thanks to such a low assessment of the work of the president and, accordingly, the ruling party, the Democrats may lose their leadership in both chambers next year. It is reported that Americans are dissatisfied with strong inflation and expect new waves of a pandemic that could hit the American economy. Many also note that tightening monetary policy will harm the economy and stop its growth. Recall that with the highest probability, next year the Fed will complete its economic stimulus program, as well as raise the key rate twice. As you can see, Americans are not happy with this prospect. But how else to extinguish inflation? As we've already figured out, Jerome Powell's method of just waiting doesn't work too well yet. Inflation, of course, will begin to slow down as soon as the Fed stops pouring hundreds of billions of dollars into the economy, but this has not happened yet. However, today we will find out what inflation is in November, and based on this, new conclusions can be drawn. If inflation continues to grow at its gigantic pace, then, most likely, the US dollar will resume its growth against the European currency today, as this will mean an even greater increase in the probability that next week a reduction in the QE program will be announced not by 15 billion, but by 25-30 billion. 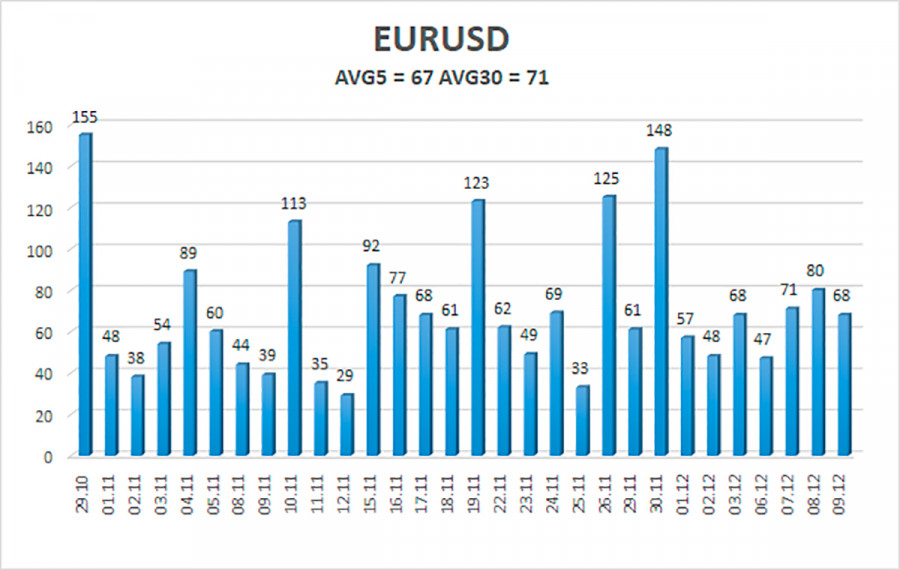 The volatility of the euro/dollar currency pair as of December 10 is 67 points and is characterized as "average". Thus, we expect the pair to move today between the levels of 1.1222 and 1.1355. A reversal of the Heiken Ashi indicator upwards will signal a new round of upward movement inside the side channel.

The EUR/USD pair has consolidated back below the moving average. Thus, today you should stay in sell orders with targets of 1.1230 and 1.1222 until the Heiken Ashi indicator turns up. Purchases of the pair should be considered if the price is fixed back above the moving average, with targets of 1.1353 and 1.1355. The high probability of a flat should also be taken into account. But it may end today, thanks to important statistics.

Interesting? Write a comment below.
 Overview of the EUR/USD pair. December 10. Americans are waiting for the deterioration of the economic situation.
Forward 
Backward 