Overview of the EUR/USD pair. December 15. The Fed's monetary policy in 2022 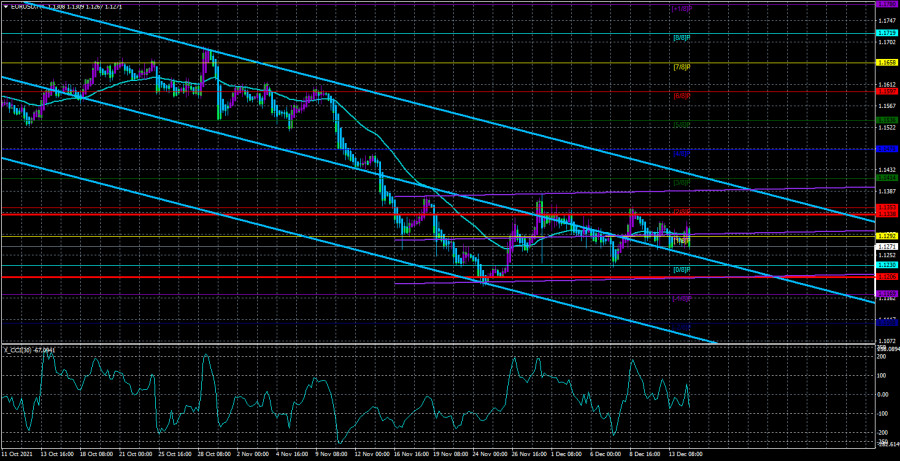 The EUR/USD currency pair finally died on Tuesday. Although in the first two trading days of the week, the pair still showed average volatility for itself, it is visible on the 4-hour timeframe that the movement is almost completely lateral. Previously, we could conclude that the pair is inside the 1.1230 – 1.1353 side channel (these levels are Murray levels), but now the pair is moving in the middle of this channel. Thus, on the eve of the Fed meeting, the results of which will be announced tonight, the pair went into a total flat. Whether it's good or bad, it's not for us to judge. We can only conclude that the markets do not want to take unnecessary risks, but want to wait for the results of the meeting and then make trading decisions. It can also be noted that with the results of the Fed meeting, almost everything is clear and understandable. Markets do not doubt that the Fed will decide to increase the pace of QE curtailment to $ 20-30 billion per month, and the entire program will be fully completed in March-April next year. This is a bullish factor for the US currency, but, as we have said before, has the US dollar exhausted the confidence of traders? The fact is that the US currency has been growing for quite a long time. Accordingly, all the factors that provoked the growth of this currency could have been worked out long ago and taken into account in the current exchange rate. If so, it is unlikely that we will see a new strong drop in the euro/dollar. This is the main danger of the current situation. The markets may start taking profits on short positions after today's Fed meeting, which will lead to a rise in the pair and a fall in the dollar, and not vice versa. In general, we would like to remind traders that in any case, it is impossible to predict 100% the decisions and rhetoric of the Fed. Moreover, it is impossible to predict the reaction of a huge number of players in the market.

The markets agree that there will only be further tightening of monetary policy.

The markets are already looking at the next year with might and main. After all, it is next year that the Fed will have to completely abandon the stimulus program and raise the key rate at least twice. However, this is far from the only opinion present on the market. Many experts expect that there will be more than two increases. Some believe that the rate will be raised for the first time in March, and not in June. Some believe that an increase in the key rate may be announced even today. However, we are interested in how the euro/dollar pair will behave during at least the first months of next year. Recall that in technical terms, the pair maintains a downward trend in 2021, but it is still interpreted as a correction against the trend of 2020. Thus, the resumption of long-term growth of the European currency can occur if you look only at the "technique". Another question is whether this movement will be justified fundamentally? If the Fed continues to tighten monetary policy, and the ECB continues to adhere to an "ultra-soft" monetary policy, it is unlikely that the markets will buy the euro. Moreover, economic growth in the European Union now leaves much to be desired, and several countries have been quarantined due to the fourth "wave" of the pandemic. We believe that at the beginning of next year, the dollar may still tend to grow against the European currency. But for the pair's quotes to fall further, at least a correction must occur first, since the last round of the downward movement already exceeds 1000 points. But let's still conclude today's Fed meeting. Maybe today we will witness some kind of surprise? Moreover, we should not forget that tomorrow the ECB will announce the results of its meeting. Will there be some surprise or an unexpected change in the rhetoric of Christine Lagarde? 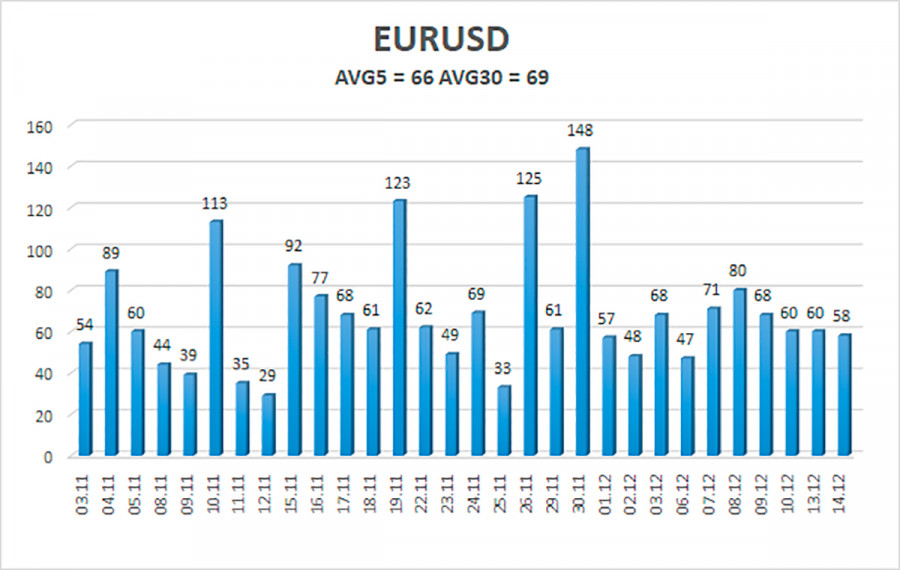 The volatility of the euro/dollar currency pair as of December 15 is 66 points and is characterized as "average". Thus, we expect the pair to move today between the levels of 1.1206 and 1.1338. A reversal of the Heiken Ashi indicator upwards will signal a new round of upward movement inside the side channel.

The EUR/USD pair has consolidated back below the moving average. Thus, today, it is necessary to remain in the sell orders with a target of 1.1230. Purchases of the pair should be considered if the price is fixed back above the moving average, with targets of 1.1338 and 1.1353. You should also take into account the fact that the pair is in the side channel. It may end this week, but it is unlikely before Wednesday evening.