Overview of the EUR/USD pair. December 16. The Fed did not surprise the markets, but at the same time continues to follow 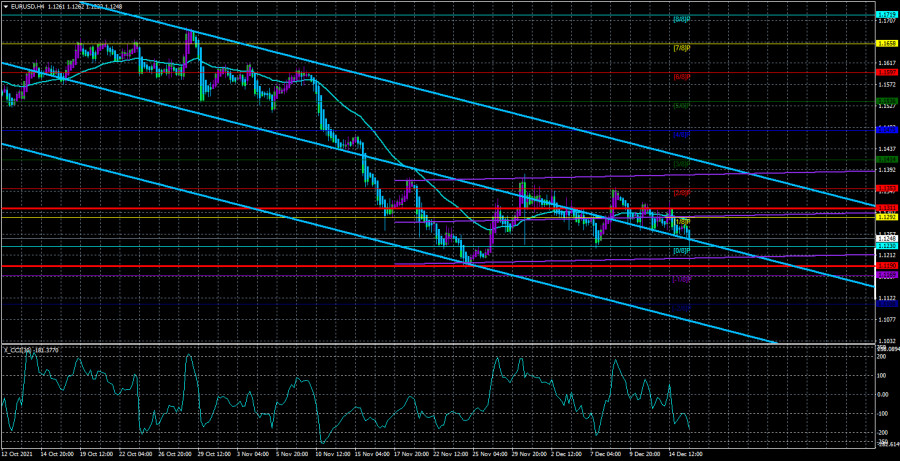 The EUR/USD currency pair stood in one place all day on Wednesday. Volatility remained minimal until the evening. The markets simply refused to trade the pair until the announcement of the results of the Fed meeting and Jerome Powell's speech at the press conference. When the results became known, the pair went down 40 points in just 5 minutes. Thus, as we expected, volatility increased in the evening. Analyzing the pair's movements last night and tonight makes no sense. The markets are trading the pair now on emotions. The Europeans did not have the opportunity to work out the results of the Fed meeting yesterday, since it was already night at that time. Thus, it will be possible to conclude the technical picture when the European trading session ends today. However, it is at the European session that the results of the meeting of the European Central Bank will be summed up, so conclusions can be made tomorrow. The US currency rose in price after the results of the meeting became known. However, where it will finish this week is a big question. So far, the downward trend continues, even if the pair manages to gain a foothold above the moving average line. In the last week, the quotes were completely between the Murray levels of 1.1230 and 1.1353. Thus, it is already good if the pair leaves this side channel. In general, the US dollar retains an advantage in pair with the euro currency, since no one expects either hawkish rhetoric or tightening of monetary policy from the ECB. Of course, there is always a chance that most experts and market participants are wrong and today the ECB will present a surprise, but there were no prerequisites for this surprise. This means that today the euro currency may get new grounds for falling against the US dollar.

The rate remained unchanged, QE was reduced by $ 30 billion.

Now, as for the results of the Fed meeting itself. The key rate was expected to remain unchanged, and the quantitative stimulus program was reduced. Thus, it will be fully completed in March-the month of next year, the FOMC said in an accompanying statement. The US currency received the necessary grounds for further growth last night. In addition, the GDP forecast for the current year has been lowered from 5.9% to 5.5%, and the unemployment forecast has been improved from 4.8% to 4.3%. The inflation forecast has been raised from 4.2% to 5.3% in 2021. In general, the Fed was practically not surprised by anything, but at the same time showed its "hawkish" attitude. If the quantitative stimulus program is fully completed in March next year, then the key rate may be raised for the first time in the same March or April. Accordingly, the Fed continues to adhere to the path of tightening monetary policy, which is good for the dollar and bad for risky assets like cryptocurrencies and the stock market.

Now it remains only to wait for the results of the ECB meeting and see what decisions it will make. After all, markets expect, at least, that the ECB will also announce a gradual reduction in stimulus programs. Therefore, if nothing like this sounds tomorrow, then the European currency will receive new grounds for a new fall against the dollar. Recall that the GDP of the European Union in the third quarter barely accelerated to 2.2%, and the US GDP slowed to 2.2%. Consequently, the European economy is in a weaker state than the American one. Naturally, this is another factor in favor of the fall of the euro currency. And do not forget about the new "wave" of the pandemic in the European Union, which is why some countries were forced to declare a new "lockdown". This factor will also harm the European economy and the European currency. 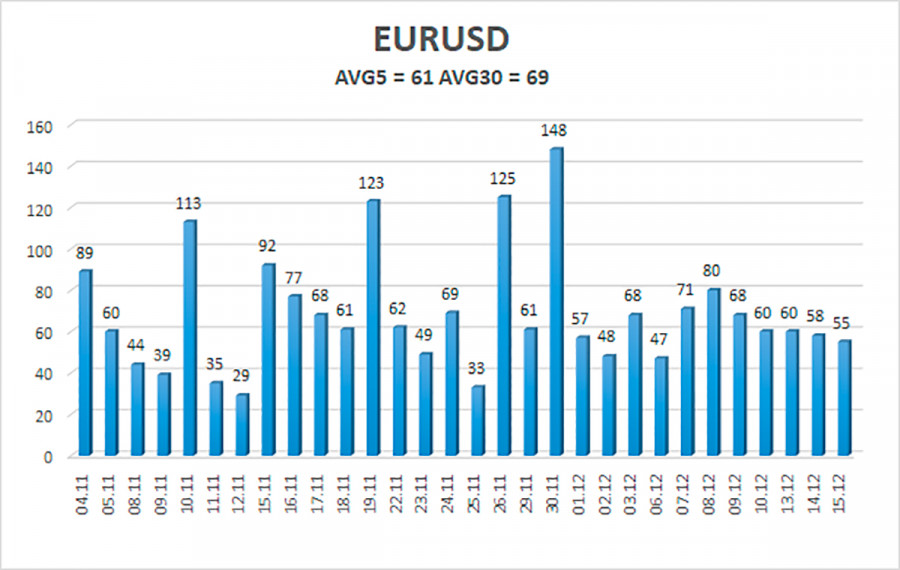 The volatility of the euro/dollar currency pair as of December 16 is 61 points and is characterized as "average". Thus, we expect the pair to move today between the levels of 1.1190 and 1.1311. The upward reversal of the Heiken Ashi indicator signals a round of upward correction.

The EUR/USD pair continues to be located below the moving average. Thus, today it is necessary to stay in sell orders with targets of 1.1190 and 1.1169. Purchases of the pair should be considered if the price is fixed back above the moving average, with targets of 1.1353 and 1.1414. Today, the pair may be trading with increased volatility, but the probability of a sideways movement is also present.

Interesting? Write a comment below.
 but at the same time continues to follow, Overview of the EUR/USD pair. December 16. The Fed did not surprise the markets
Forward 
Backward 