Overview of the EUR/USD pair. December 2. Jerome Powell amused the markets with his statements about inflation for several 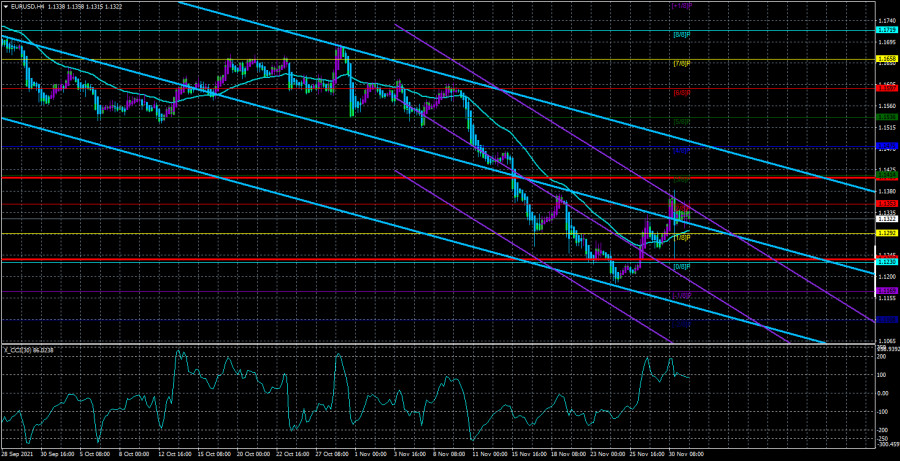 The EUR/USD currency pair was recovering on Wednesday after the shock experienced on Tuesday. Jerome Powell did not report anything supernatural in the Senate. He only said that it had been clear and understandable to many market participants for a long time. But one thing is the guesses of traders and investors, as well as their position, and another thing is the official statement of the head of the Fed, on which the monetary policy in the whole country depends. Thus, when the markets heard yesterday that Powell no longer interprets the current maximum inflation in 30 years as a "temporary phenomenon," panic began. It was panic, because the dollar first rose by 140 points in just one hour, and then fell by 100 points over the next 3-4 hours. As a result, the pair started yesterday whereas it started Tuesday. It turns out that on Tuesday, the euro/dollar "flew" in both directions and returned to the airfield. Nothing has changed for either the dollar or the euro after the ultra-high volatility on Tuesday. Moreover, nothing has changed from the point of view of the technical picture. The euro/dollar pair is still located above the moving average line and could not even gain a foothold below it when the US dollar was getting more expensive. Thus, the upward trend is now formally maintained. We have already said earlier that the US currency could have already exhausted its entire stock of luck and fortune. The fact is that it has been growing for almost the entire year 2021. And even though it has not grown too much over such a long period, it has nevertheless grown. Thus, all the factors that could guide the market when buying US currency in recent months can already be worked out several times. As you can see, even the frank hint of the head of the Fed to a higher rate of reduction of the QE program and a faster increase in the key rate did not force traders to return to buying the US currency.

What did Jerome Powell say and what does it mean for the US dollar?

What Powell said on Tuesday night was known as early as Tuesday evening. We refused to believe that Powell's comment on the rejection of the interpretation of "temporary inflation" could provoke such a strong movement. However, it seems that it is. What is important here is not an updated interpretation of what is happening, but the fact that Powell acknowledged that inflation may continue to accelerate further. Or at least stay high enough. Consequently, even with the onset of 2022, which is less than a month away, the situation may not change at all. Moreover, it can get even worse. Thus, Powell will now have to consider an option with a faster curtailment of the quantitative stimulus program to somehow repay the pace of price growth in the United States. Moreover, now the whole world is facing a new "wave" of the pandemic, as well as a new strain of "omicron". And these two events are not the same thing. A new strain of "omicron" can cause a new wave of diseases or an increase in the "fourth" wave. Already, some European countries are going into quarantine, and Jerome Powell himself said in the Senate about the high risks to the economy associated with the new strain. According to Powell, due to the new strain, the pace of recovery of the US labor market may decrease, and problems with supply chains will not be solved in the near future. This, in turn, may provoke an even greater increase in inflation. Thus, already this month, the Fed will have to make a very important decision – to risk the labor market and increase the pace of QE curtailment, or not to put additional pressure on the labor market and sacrifice inflation. One way or another, the markets can only wait for a tightening of monetary policy now, but will the dollar continue to grow on this basis? From our point of view, the answer is not obvious. 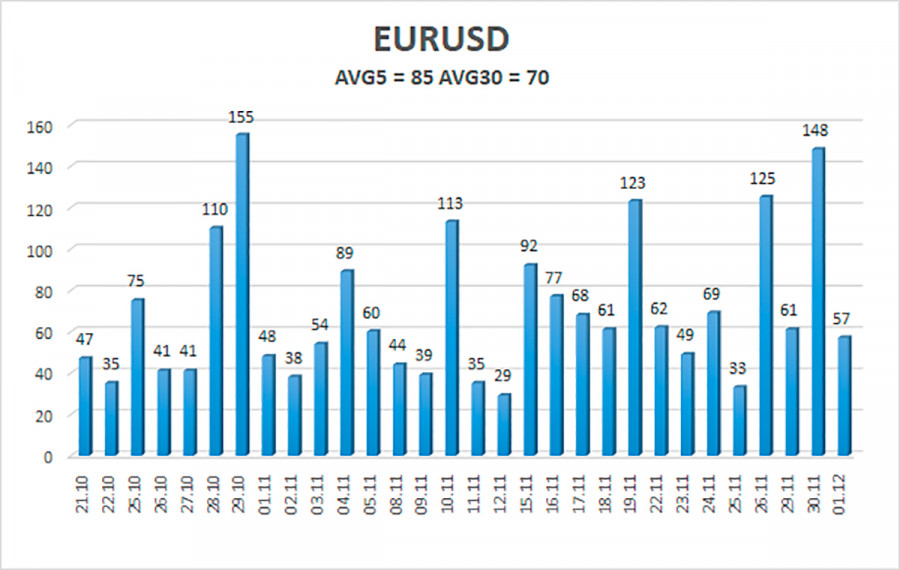 The volatility of the euro/dollar currency pair as of December 2 is 85 points and is characterized as "high". Thus, we expect the pair to move today between the levels of 1.1237 and 1.1409. The reversal of the Heiken Ashi indicator downwards signals a new round of downward movement.

Interesting? Write a comment below.
 Overview of the EUR/USD pair. December 2. Jerome Powell amused the markets with his statements about inflation for several
Forward 
Backward 