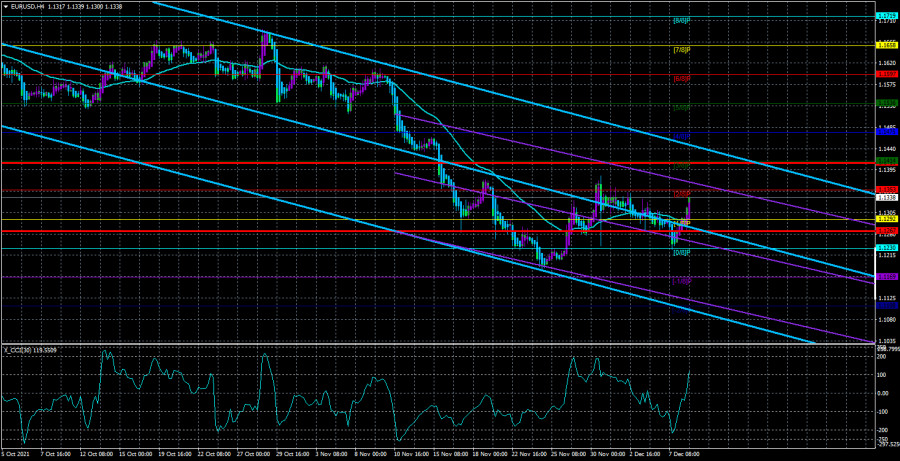 The EUR/USD currency pair on Tuesday again failed to continue the downward movement and again consolidated above the moving average line. This suggests that the markets still do not find grounds for new sales, although at the same time they perfectly find grounds for selling the British pound, which continues to fall in tandem with the dollar. We draw attention to the fact that now the euro/dollar and the pound/dollar are moving completely differently, although there is a downward trend there. The pound is falling more quickly and more frequently, although practically no macroeconomic messages are coming from the UK now. There is no news from the European Union of almost any nature right now, and the fundamental background from overseas should affect both major pairs equally. Nevertheless, the euro currency still shows weak signs of the formation of a new upward trend, which we have been waiting for several months, at least. However, given the strength of the upward movement, most likely, it will have to wait a few more months. It is rare when a trend starts with such a vague movement. Most likely, we will see the standard three waves of corrections for the euro, after which the movement to the south will resume. This will mean that the dollar will continue to rise in price. Naturally, this will require a serious fundamental background, since the dollar has been growing for quite a long time already. We believe that it can continue to be supported only by the factor of tightening monetary policy in the United States and the absence of it in the European Union. Although the ECB is also considering curtailing the PEPP stimulus program in March, it is not going to raise rates next year, and an expanded APP program may replace PEPP.

Sometimes it seems that all the heads of central banks simply agree with each other on what kind of rhetoric they will adhere to in public. Of course, this is not the case in reality. However, ECB Vice President Luis de Guindos said yesterday that high inflation may persist longer than previously expected. Recall that just a week ago Jerome Powell also changed his rhetoric to a similar one. In addition, de Guindos said that disruptions in supply chains can affect the economic growth of the Eurozone, but at the same time inflation will begin to decline from 2022. However, Jerome Powell also believes that inflation will begin to decline by itself next year. And whether this is true or not, we will see. De Guindos said it would take longer than previously expected to return to 2% inflation. However, this information did not become a revelation for the markets. The European currency has risen slightly over the past day, but it is unlikely that this is due to de Guindos' speech. The head of the ECB, Christine Lagarde, did not tell the markets anything interesting and important at all. And what could she tell them? As we have repeatedly drawn the attention of traders, Lagarde speaks quite often, so he physically cannot please market participants with new and interesting information every time. Thus, traders may have found a "hawkish" meaning in what was said, thanks to which the euro slightly increased in price on Wednesday, but in general, the pair is now moving as it will not know which way to continue its global movement. In such a situation, we continue to recommend not guessing about global reversals, but trading according to the trend. At this time, the trend is downward, as evidenced by two linear regression channels at once. Thus, even fixing above the moving average is not a reason for strong purchases. Rather, for small purchases, in case a new upward trend begins to form from here. Also, the markets remember that on Friday the most important report of the week will be published - American inflation for November. Therefore, if the actual value again exceeds the value of last month, this may provoke a new strengthening of the US currency, as it will further increase the likelihood of accelerating the curtailment of the quantitative easing program at the meeting, the results of which will be known on December 15. 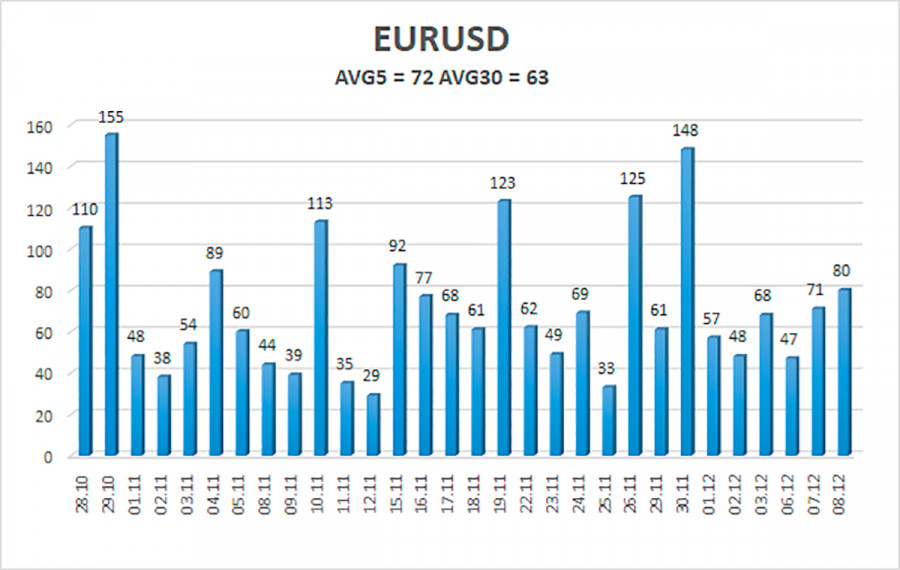 The volatility of the euro/dollar currency pair as of December 9 is 72 points and is characterized as "average". Thus, we expect the pair to move today between the levels of 1.1267 and 1.1413. The reversal of the Heiken Ashi indicator downwards signals a new attempt to continue the downward movement.