Overview of the GBP/USD pair. December 10. The UK is introducing a "plan B" because of Omicron. Boris Johnson gets into a 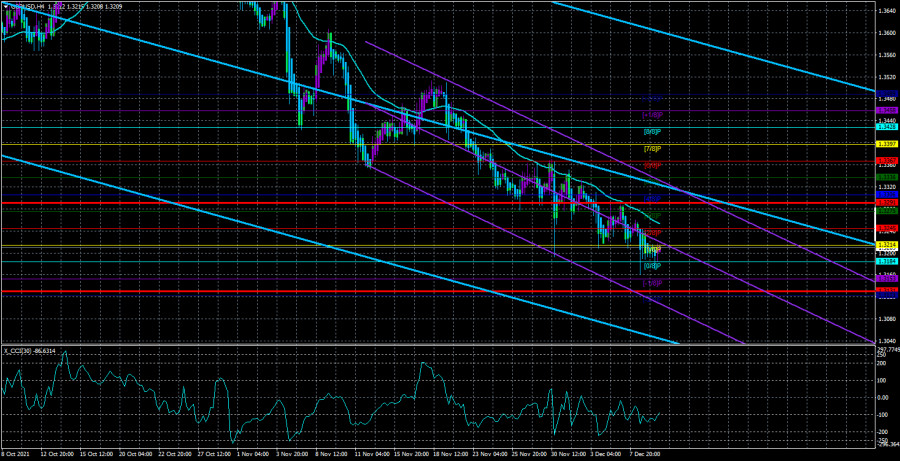 The GBP/USD currency pair continued to fall on Thursday. Recall that the euro/dollar pair at the same time managed to gain a foothold above the moving average. It showed at least a hint of a correction. Nothing like this is observed for the pound sterling. The pair, though not too fast, is getting cheaper almost every day, and the bulls' strength is not enough even to consolidate above the moving average. Thus, the trend now remains unambiguously downward and there is not a single signal about the end of the downward trend. Thus, the pound, which for most of this year just did not show much desire to fall against the dollar, began to actively fall at the end of the year. Of course, a huge number of factors are now playing against the pound. At the same time, it is still very difficult to understand which of them are taken into account by the market and which are not. But such a large amount of negativity continues to come from Britain that it remains only to choose based on what to get rid of the British pound today. In addition, the US dollar receives support from traders every day because the Fed may announce an acceleration in the pace of curtailing the QE program as early as next week. Thus, at the moment nothing changes in the balance of power between the dollar and the pound. It is clear that sooner or later the fall will stop. It is clear that sooner or later the bears will get enough and at least a correction will begin. But so far nothing like that is visible.

Boris Johnson threw a Christmas party during the lockdown.

Meanwhile, in the UK, the number of diseases with a new strain of "coronavirus" is growing, which forced the government led by Boris Johnson to put into effect a "plan B", which provides for stricter restrictions within the country. So, from next week, the so-called COVID-passports will begin to operate in the country, without which Britons will not be able to visit any public place. In addition, wearing a mask from next Monday becomes mandatory in public places, in transport, and Britons are advised to work remotely. By the way, it cannot yet be said that the UK has been covered by the omicron strain. However, Boris Johnson himself said that the strain is spreading faster than the delta, so the government is forced to protect itself and tighten quarantine requirements. According to the Prime Minister, the new strain can cause an increase in the number of hospitalizations and deaths...

At the same time, Boris Johnson himself, who recently became a father for the seventh time, was forced to justify himself in Parliament for the fact that on December 18 last year, at the height of the next wave of the epidemic, when the whole country was in lockdown, a party was held at 10 Downing Street among members of the British government. A video came online where one of Johnson's employees answers various questions about the party while laughing sincerely at the same time. As a result, it's not the first time Boris Johnson has been hit by a ton of criticism, and some politicians have called on him to resign if suspicions about the party are confirmed. The fact is that Johnson himself repeatedly denied the fact of holding a Christmas party, but after the video was made public, he confessed that he was still there, and he was misinformed. The prime minister promised to conduct an internal investigation, which caused friendly laughter among the opposition. The leader of the Labor Party, Keir Starmer, said that "Johnson holds people for fools" and called on him to tell the truth. The leader of the faction of the Scottish National Party, Ian Blackford, said: "People were making sacrifices, and at the same time the UK government was laughing in their faces. This Prime minister has lost the trust of the British and even his party members." It is noteworthy that the "lockdown" was introduced last year on December 16, and already on December 17, there was a warning from the government, in which people were urged not to attend Christmas parties and stay at home. It is also reported that the government arranged at least two more parties in December last year. Thus, the credibility of Boris Johnson continues to fall in the UK. We have already noted more than once that this Prime Minister has won an extremely small number of victories in his post. But he distinguished himself many times by getting into various scandals. 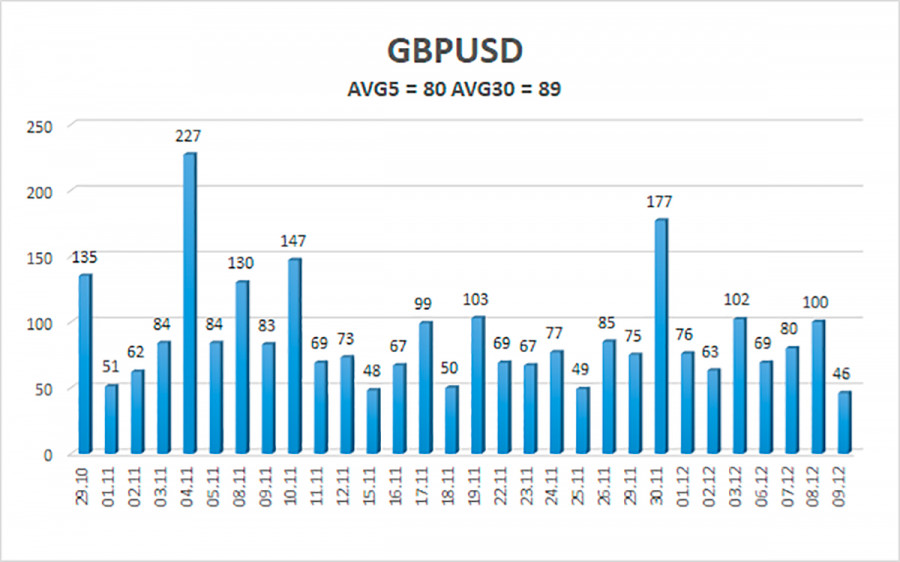 The average volatility of the GBP/USD pair is currently 80 points per day. For the pound/dollar pair, this value is "average". On Friday, December 10, we expect movement inside the channel, limited by the levels of 1.3131 and 1.3291. The upward reversal of the Heiken Ashi indicator will signal a new round of corrective movement.

The GBP/USD pair continues its downward movement with frequent corrections on the 4-hour timeframe. Thus, at this time, it is necessary to remain in short positions with the targets of 1.3153 and 1.3131 levels until the Heiken Ashi indicator turns upwards. Buy orders can be considered in the case of a confident consolidation of the price above the moving average with targets of 1.3291 and 1.3306 and keep them open until the Heiken Ashi turns down.

Interesting? Write a comment below.
 Overview of the GBP/USD pair. December 10. The UK is introducing a "plan B" because of Omicron. Boris Johnson gets into a
Forward 
Backward 