Overview of the GBP/USD pair. December 15. The UK may be overwhelmed by a wave of the "omicron strain" in January 2022. 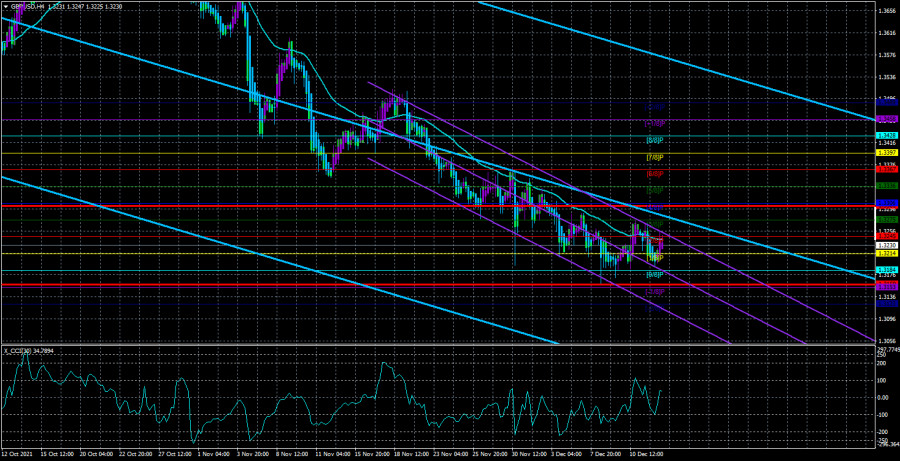 The GBP/USD currency pair moved rather weakly again on Tuesday. Recall that the volatility on Monday was only 60 points. It was about the same amount on Tuesday. For the pound, this is very little. In addition, the pair is trading in a limited price range near its annual lows. Thus, the first conclusion that can be drawn is that the bears have not left the market, but are hiding and waiting. They can only wait for the meetings of the Fed and the Bank of England. Probably, if the Fed decides on a new tightening of monetary policy, the pair's sales will resume. However, as we have already said in the article on the euro/dollar, another option is also possible, in which the markets will begin to take profits on short positions, since the US currency is also growing against the pound for quite a long period and, at least, a correction is already overdue. However, both linear regression channels are still pointing downwards and there is no reason to expect them to turn up now. The CCI indicator has not entered the oversold area for a long time, which is very strange, considering that all this time the pair has been doing nothing but declining. Perhaps at this time, market participants have any doubts about the meeting of the Bank of England, the results of which will be announced on Thursday. Perhaps, if BA presents a surprise as well as a month earlier, the pound will find market support. However, so far there is no reason to assume the end of the downward trend. And we believe that it will be most correct to conclude all the meetings of the central banks.

The situation with the "omicron strain" in the UK is getting worse.

Meanwhile, a new strain of "omicron", which has already been recognized by South African doctors as a strain "that is not more dangerous than delta, but much more contagious", is beginning to take over the UK. It is already being reported that the number of daily recorded cases of omicron disease increases almost twice every day. British Prime Minister Boris Johnson made an address to the nation on television, in which he warned of an "avalanche-like onset of a new strain." Johnson called the only way to defeat the "coronavirus" is vaccination. He stated that two doses of vaccine are not enough against the new strain, a third booster vaccination is needed. He said that the third dose will be available to every Briton immediately after the New Year. The British Prime Minister also noted that even if omicron is not the most dangerous strain with a low percentage of hospitalizations and deaths, its high contagiousness will still lead to an excessive burden on the healthcare system.

Meanwhile, scientists from the London School of Hygiene and Tropical Medicine came to a similar conclusion. They said that omicron would be less dangerous for those who received both doses of the vaccine, and a third vaccination could contain a new wave of the epidemic. However, to contain this wave, the entire population of the UK should receive a third vaccination in the next few weeks, which is unlikely to be done. Therefore, already in January, the country may face a new "wave" of diseases, and the number of deaths from a new strain may range from 25 to 75 thousand by the end of April. Dr. Nick Davis said that omicron spreads very quickly and can easily become the dominant strain in the near future. British Health Minister Sajid Javid said that already about 40% of those who become ill in London can be infected with omicron. "Omicron is spreading at a phenomenal rate. We haven't seen this before. The number of cases doubles every two to three days. This means that we will face a new big wave," Javid said. That is, potentially, a very negative fundamental background is emerging for the British pound again. It is hardly worth saying once again that a new "wave" means new deaths, new risks, a new economic slowdown. Of course, in the current conditions of the highest inflation, a new "wave" may even slightly restrain price growth, but it will also restrain economic growth, which, of course, is undesirable. And Boris Johnson has repeatedly made it clear that he does not intend to close the country for a "lockdown" since the consequences of this are too detrimental to the economy. 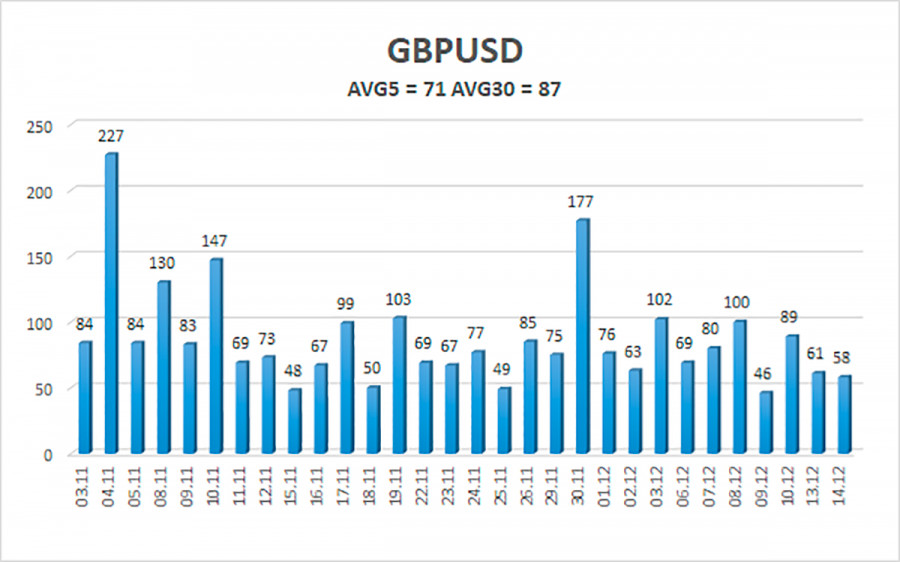 The average volatility of the GBP/USD pair is currently 71 points per day. For the pound/dollar pair, this value is "average". On Wednesday, December 15, we expect movement inside the channel, limited by the levels of 1.3159 and 1.3301. The reversal of the Heiken Ashi indicator downwards signals a new round of downward movement.

The GBP/USD pair continues to adjust against the downward trend on the 4-hour timeframe. Thus, at this time, new long positions with targets of 1.3306 and 1.3336 levels should be considered in case of a new close above the moving average. Sell orders can be considered in the event of a price rebound from the moving average with targets of 1.3184 and 1.3153.

Interesting? Write a comment below.
 Overview of the GBP/USD pair. December 15. The UK may be overwhelmed by a wave of the "omicron strain" in January 2022.
Forward 
Backward 