Overview of the GBP/USD pair. December 16. Boris Johnson's rating continues to fall into the abyss. 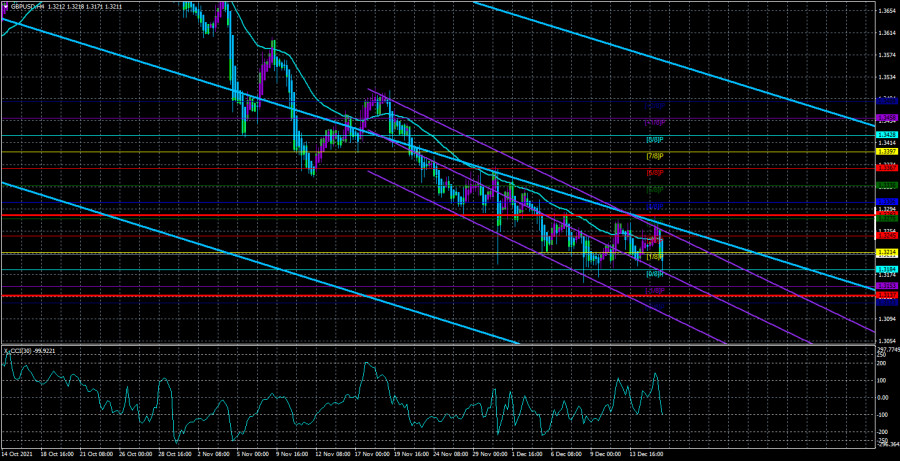 The GBP/USD currency pair was again in very calm movements for most of Wednesday. We are not considering the movements of the pound/dollar pair in the evening and at night, because after such an important and serious event as the Fed meeting, the markets always need some time to calm down and recover. It's no secret that often after the announcement of the results of the meeting, the markets trade on emotions, and the next day they win back all the movement immediately after the meeting. Thus, we believe that it is better to analyze what has happened on the market today in the late afternoon. When not only the Fed meeting will be left behind, but also the meeting of the Bank of England. In yesterday's articles, we analyzed what decisions the Fed can make and what this threatens the US currency. Today, something similar could be done about the meeting of the Bank of England. However, enough has already been saying about this. Therefore, we only note that BA remains in some way a "dark horse", around which there are a huge number of rumors, but most likely, the regulator will again take a wait-and-see, neutral position today. The fact is that the "coronavirus", its fourth "wave", has been raging in the UK in recent weeks, and in addition, it is completely unknown how the appearance of the "omicron" strain in the country will end, which, according to doctors and scientists, is spreading exponentially at this time. And although it does not cause hospitalizations and deaths in most cases, it is extremely contagious, so a much larger number of Britons can become infected with it, which in any case will create a strong burden on the healthcare system. Thus, it is unlikely that BA will risk raising the rate in December. Most likely, the economic stimulus program will remain unchanged.

The situation for Boris Johnson is getting worse. For conservatives, too.

Over the past two years, we have repeatedly written that Boris Johnson has had few victories as prime minister. He can be imputed by the completion of Brexit. Although this is not his merit. Moreover, Johnson did everything to ensure that Brexit for Britain was as "tough" as possible. In addition, Johnson constantly gets into various kinds of scandals. Then he is resting at the private villa of one of the Samaritans of the Conservative Party, and the public is wondering what Johnson promised to "pay" for the rest. Then he makes expensive repairs in his apartment and the public wonders where the money comes from? Then he decides to disperse Parliament so that it does not interfere with him to implement a "hard Brexit", and deputies have to cancel Boris Johnson's decision through the Court. There are a huge number of such cases and examples. However, as many political scientists say, Boris Johnson is disliked not only by the opposition (this is not surprising). He is also disliked within his party. However, this is politics. As long as the British were ready to vote for Johnson, the Conservative Party was ready to put up with its "Trump-like" leader. But now, after another scandal (even two), Johnson's political ratings have collapsed. At first, it turned out that at the height of the "lockdown" last year, when the government strongly insisted on canceling all celebrations of Christmas and New Year among the population, several celebrations were held at 10 Downing Street, attended by Boris Johnson and 40-50 of his colleagues. Then it turned out that one of the conservatives lobbied for the interests of several companies, and Johnson stood up for him, which involved himself in a corruption scandal. It all ended with the fact that a poll from the respected YouGov agency showed that only a quarter of Britons are now in favor of the British prime minister, and more than 50% do not support him. Several respected European publications write at once that Johnson may well leave his post ahead of schedule. And even if this does not happen, it will not be the Conservatives or Boris Johnson who will win the next election. 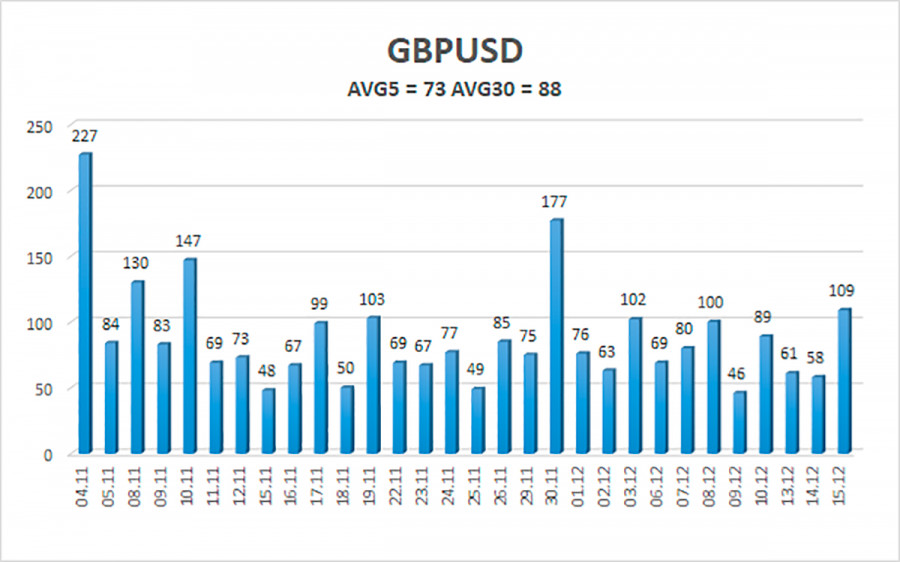 The average volatility of the GBP/USD pair is currently 73 points per day. For the pound/dollar pair, this value is "average". On Thursday, December 16, we expect movement inside the channel, limited by the levels of 1.3137 and 1.3283. The upward reversal of the Heiken Ashi indicator will signal a new round of upward movement.

The GBP/USD pair is trying to continue its downward movement on the 4-hour timeframe and continues to be near its annual lows. Thus, new long positions should be considered with targets of 1.3306 and 1.3336 levels in case of a new close above the moving average. Sell orders can be considered now, as the price is below the moving average with targets of 1.3153 and 1.3137. The probability of lateral movement remains.