Overview of the GBP/USD pair. December 2. The omicron strain can stop the growth of inflation around the world 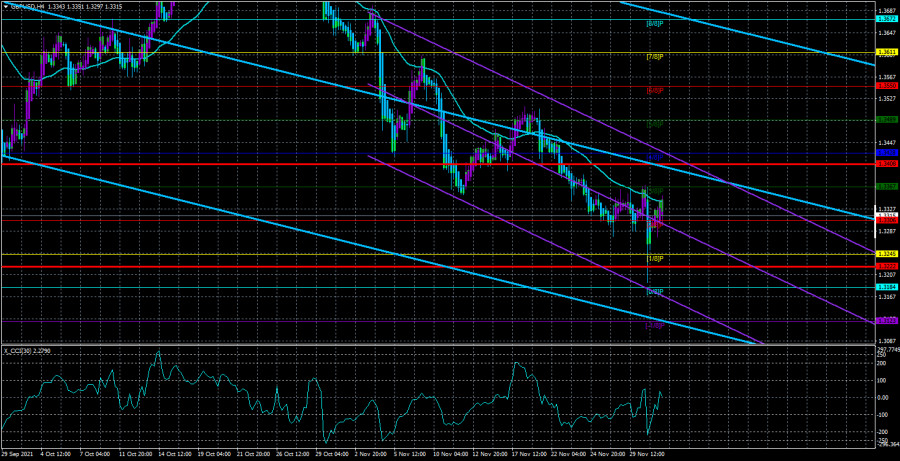 The GBP/USD currency pair also collapsed on Tuesday, as did EUR/USD. The only difference is that at the time of the beginning of the fall, the pair was still below the moving average line, and the EUR/USD pair was above the moving average and remained there after the end of the fall. Thus, at the moment, there is a downward trend for the pound sterling and an upward trend for the euro currency. The discrepancy is not too large, but it still exists. And we have already said earlier that the uncorrelation of the two main pairs is an infrequent phenomenon and if it happens, it means that something is wrong in the foreign exchange market right now. And a lot of things are not in order right now. It seems that for the first time since the pandemic, the economy is slowly facing several problems at once, which it is not yet known how to solve. Moreover, solving one problem can aggravate another, and all this against the background of a new "wave" of the pandemic, as well as the threat from the "omicron" strain. But this is about the States. In the UK, the situation is no better, but more fun. We will not repeat ourselves once again and list all the topics that have been discussed by the markets lately. From the "fresh" one can note only a new conflict between France and Great Britain. This time because of migrants and because of Boris Johnson's lack of talent to express his thoughts without mocking his opponent. The problem is this: France is quite loyal to migrants, so they flock there from all over the world. And since France is in the European Union and Europe, migrants from it are already spreading throughout the European Union. Naturally, the UK does not like this, which is no longer in the Alliance, and does not want to host French migrants, since the migration issue was one of the reasons for Brexit. In general, it is very difficult for the British currency to grow now, but at the same time, as we have already said, the US dollar could exhaust all the factors that helped it show growth in 2021. Recall that any fundamental hypothesis must be confirmed in technical analysis. So far, there are no signals to change the trend to an upward one.

Under certain conditions, Omicron can even help humanity.

A new strain of "coronavirus" was discovered only last week, and the world has already been thrown into shock because of it. In principle, nothing is surprising in this, since patients with the new strain are already found in many countries of the world, which gives reason to assume that it has already begun to spread around the world. Doctors and epidemiologists have done their job, saying that this variant of the "coronavirus" is even more dangerous and contagious than the "delta". Moreover, they are infected mainly by young people, many of whom felt completely safe, believing that only the elderly or those with serious health problems suffer from the coronavirus. Thus, we can conclude that the world community is scared, which means that economic and business activity may collapse again in the near future, and people will refuse to go to work, where they can contact a large number of people and get infected. Nobody wants to get sick. Therefore, many experts expect another difficult winter. US President Joe Biden, however, has already stated that there is no reason to panic. Now humanity has vaccines at its disposal, so this winter the confrontation with the virus will be conducted with the help of these weapons, and not with the help of "lockdowns". However, the global economy may still experience a shock. It may have a positive effect on inflation, which has recently accelerated in the European Union, the United States, and the United Kingdom. A new "wave" of the pandemic can cool the markets, force people to spend less and buy goods, which will lead to a slowdown in price growth and remove the imbalance between supply and demand. But, on the other hand, we are also talking about a new decline in economic growth. 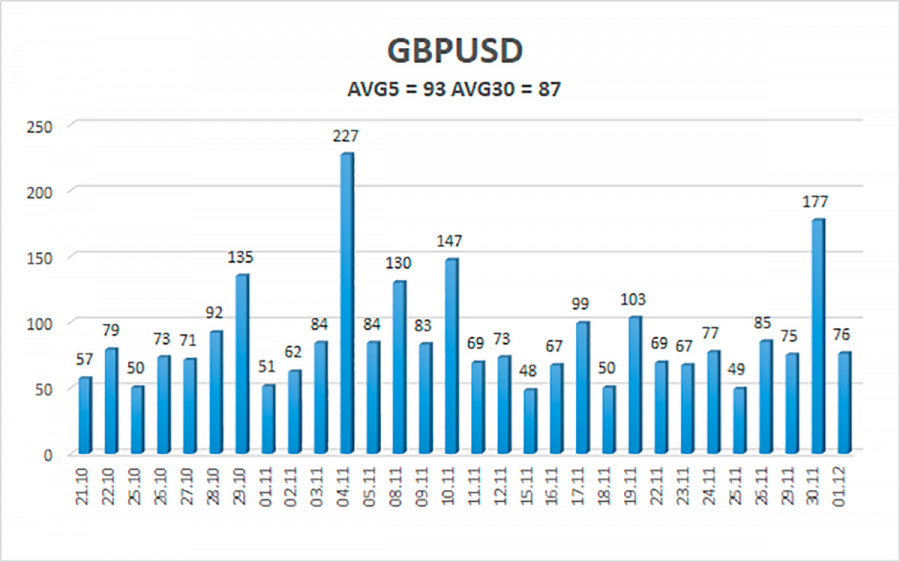 The average volatility of the GBP/USD pair is currently 93 points per day. For the pound/dollar pair, this value is "average". On Thursday, December 2, we expect movement inside the channel, limited by the levels of 1.3222 and 1.3408. The reversal of the Heiken Ashi indicator downwards signals a possible resumption of the downward movement.

Interesting? Write a comment below.
 Overview of the GBP/USD pair. December 2. The omicron strain can stop the growth of inflation around the world
Forward 
Backward 