The bitcoin market continues to stretch price cycles. It is the reason for losing retail traders targeting quick results. The altcoin market has advantages for medium- and short-term trades and is abundant in potentially lucrative projects. However, as for the alternative coin market, it is essential to focus on BTC/USD quotes.

First, it is associated with fundamental factors that could determine a further trend direction. Bitcoin is a signal for traders and allows them to determine how the cryptocurrency market will react to certain news. It is especially significant for trading altcoins paired with the US dollar. Bitcoin is a means of countering inflation, and therefore its position has become largely dependent on the US dollar. Thus, it is possible to determine the dollar's position in the near future accurately due to the Fed meeting's outcome. Let's give the latest and most obvious example: The Fed said that the highest inflation rate of 6% had been registered in the US for 30 years. At the time this news was announced, bitcoin began to rise, followed by the rest of the altcoins. The reason why bitcoin is the main cryptocurrency will be mentioned further.

Apart from the quotations of the main cryptocurrency, it is worth focusing on BTC's market dominance rate. Obviously, bitcoin is the world's most significant and massive cryptocurrency, and therefore its influence on small altcoins is excessive. Besides, the BTC dominance chart was created to track the degree of bitcoin's influence on the altcoin market. By monitoring the trend of this indicator it is possible to determine how profitable it is to trade altcoins. If bitcoin's dominance rate falls, other cryptocurrencies have opportunities to grow. The protracted period during which bitcoin loses market dominance is called the altcoin season. This cycle is the most profitable for trading different digital assets.

As of 3:30 pm, BTC's share of dominance is again declining to the level of 40, which is a positive sign for altcoin trading. Moreover, the metric is within the local downtrend and failed to break the upper boundary of the channel. This fact indicates that activity in the altcoin market is increasing, which is evident in such coins as ETH, SOL AVAX and Terra. Taking this aspect into account, trading in alternative digital assets in the coming week will generate a considerable profit. Notably, bitcoin's influence on altcoins is still decisive, and therefore any BTC collapse will provoke the fall of most altcoins. 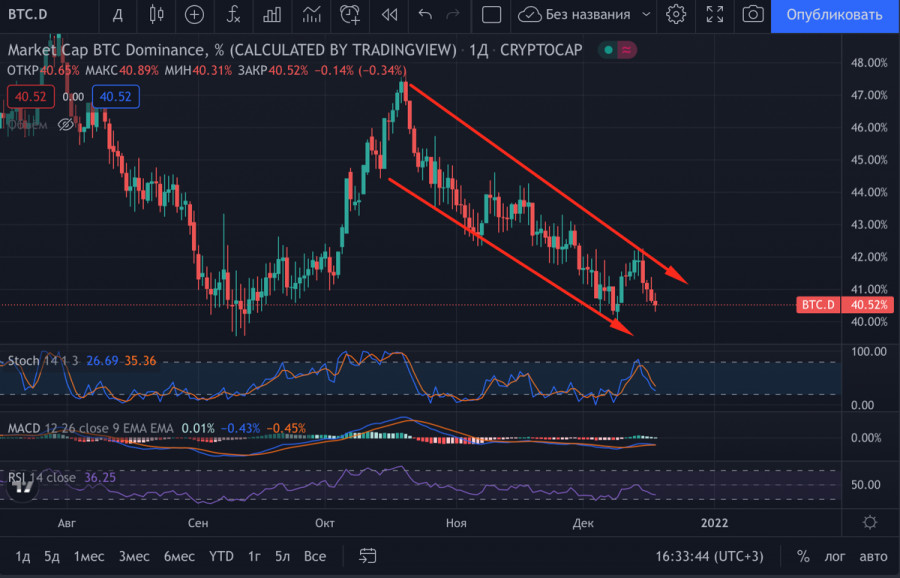 Why it is essential to monitor bitcoin currently?

I stress this fact as on December 18, BTC/USD looks uncertain. The asset is consolidating, however is within a downtrend. Besides, the cryptocurrency broke a significant support level at $47,000 and tested the support area at $45,800. I assume that due to lack of buyers' activity and absence of positive impulses for growth, BTC will make a bearish breakout of $45,800. Subsequently, the price will drop to $42,000-$45,000 and make a bounce to the safe zone. A decline into the range of $42,000-$45,000 is of crucial significance as it will be accompanied by a drop in the altcoin market. Consequently, BTC's share of dominance may decrease again, making altcoins more independent. Overall, the situation with bitcoin is complicated, and therefore trading altcoins, it is recommended to be cautious and insure deposits. 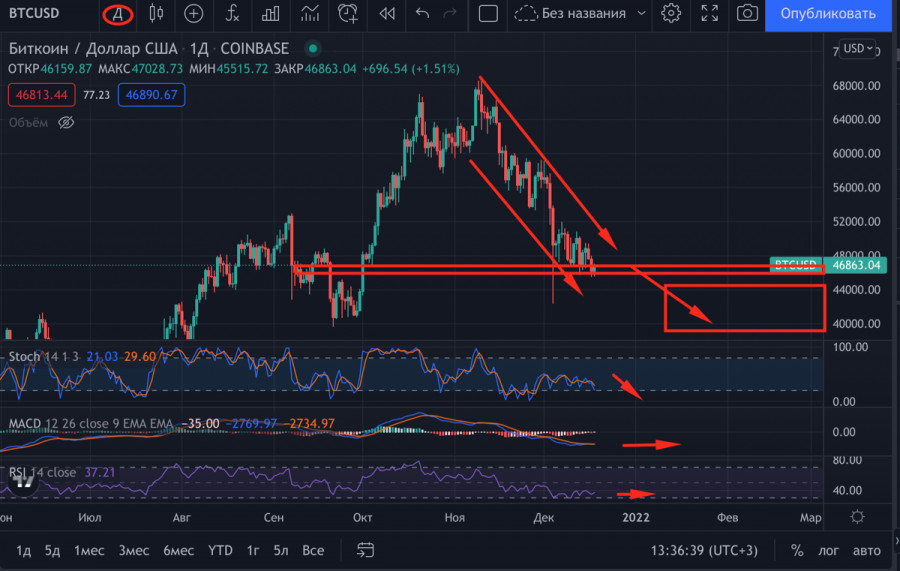