Analysis of trades and tips on trading the euro

Yesterday there were many signals to enter the market. Notably, all of them were implemented according to scenario No. 2. At the very beginning of the European session, the euro/dollar pair tested 1.1343 when the MACD indicator was still in the negative zone. So, it is better to refrain from opening long positions. After some time, the price quickly went down to test 1.1320. The MACD indicator began its downward movement from the zero mark, which was a confirmation of the correct entry point. After decreasing by 15 pips, the euro faced strong pressure. In the middle of the day, it made a new attempt to test 1.1320 when the indicator had already moved quite far from the zero mark. It limited the pair's downward movement. Another attempt to test the indicted level led to the formation of a long signal according to scenario No.2. As a result, the pair quickly rose to 1.1343, allowing traders to make a profit of about 25 pips. There was a similar story with the 1.1343 level. In that case, investors opened short positions. The downward movement also amounted to about 25 pips.

Yesterday's data on PMI Manufacturing Indexes for Germany, France, and Italy failed to give a boost to the euro as their figures were all close to economists' forecasts. Notably, a similar indicator in the US that turned out to be slightly lower than economists' predictions pushed the greenback higher. however, the pair was unable to escape the sideways channel. As widely expected, traders almost ignored Jerome Powell's speech. His speech did not contain anything new. He repeated the facts he mentioned on Tuesday.

A batch of reports on the eurozone producer price index and the unemployment rate are due today in the morning. These will be the October readings. This is why these reports are unlikely to affect the pair. There could be some changes only if inflation turns out to be much higher than economists' forecasts. It will spark demand for the euro. Fazio Panetta, a member of the ECB Executive Board, will give a speech. analysts expect him to make comments on monetary policy tightening. In the afternoon, the US weekly initial jobless claims report will be published. Therefore, the US dollar is unlikely to receive support from this data. Janet Yellen and FOMC members Rafael Bostic and Mary Daly will also make speeches today. Analysts believe that they will continue to adhere to the current parameters of monetary policy. They may also hint at considerable changes, which is bullish for the US dollar.

Scenario No.1: today, it is recommended to open long positions on the euro when the price reaches 1.1337 (the green line on the chart) with the target level of 1.1376. It is better to close positions at the level of 1.1376 and open short positions on the euro immediately in the opposite direction (counting on a movement of 10-15 pips in the opposite direction from the level). The euro may rise if eurozone producer prices data is upbeat. The upward movement will be limited due to concerns over a new strain of coronavirus and statements of FOMC members on asset purchases tapering. Important! Before opening long positions, make sure that the MACD indicator is above the zero mark and it has just begun to rise from it.

Scenario No.2: it is also possible to open long positions on the euro today if the price approaches 1.1310. The MACD indicator should be in the oversold area, which will limit the downward movement. It may lead to an upward reversal. The price may rise to 1.1337 and 1.1376.

Scenario No.1: it is recommended to open short positions on the euro after the price approaches 1.1310 (the red line on the chart). The target level is located at 1.1274 level. After that, it is better to lock in profits and open long positions in the opposite direction (counting on a movement of 10-15 pips in the opposite direction from the level). The euro may face strong bearish pressure in case of weak economic indicators for the eurozone, as well as Jerome Powell's hawkish statements on monetary policy. Important! Before opening short positions, make sure that the MACD indicator is below the zero mark and it has just started to decline from it.

Scenario No.2: it is also possible to open short positions on the euro today if the price reaches 1.1337. The MACD indicator should be in the overbought area. It will limit the upward movement of the pair. It may also lead to a downward reversal. Therefore, the pair is expected to tumble to 1.1310 and 1.1274. 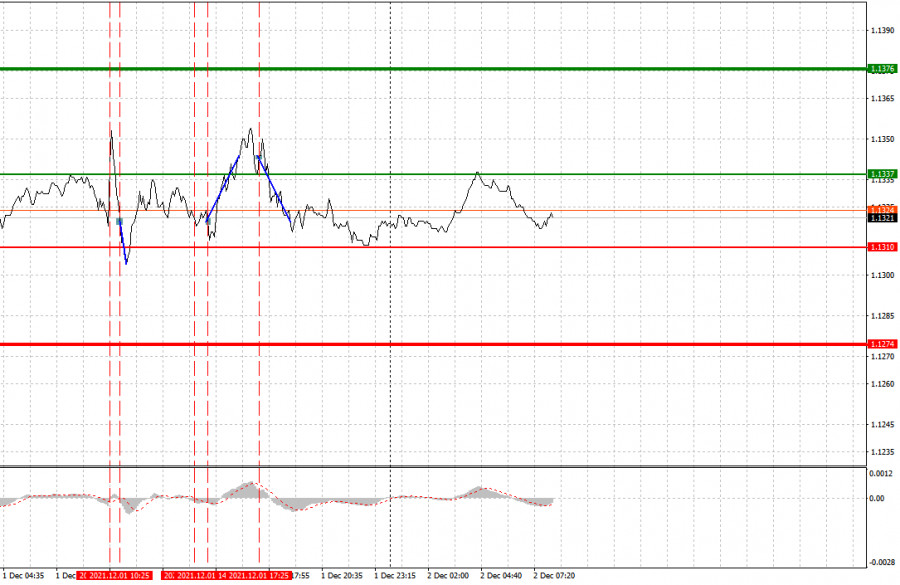 Description of the chart:

The thick green line shows the estimated price where traders can place a Take profit order or close their positions by themselves as the price is unlikely to rise above this level.

The thick green line shows the estimated price where traders can place a Take profit order or close their positions by themselves as the price is unlikely to decline below this level.

The MACD indicator. When entering the market, it is important to pay attention to overbought and oversold zones.

Important. Novice traders need to make very careful decisions when entering the market. Before the release of important fundamental reports, it is better to refrain from opening new positions. The market is usually quite volatile ahead of the publication of economic statistics. If you decide to trade during the news release, then always place stop orders to minimize losses. Without placing stop orders, you can lose the entire deposit very quickly, especially if you do not use money management, but trade in large volumes.

Remember that for successful trading it is necessary to have a clear trading plan, following the example of the one presented above. Relying on spontaneous trading decisions based on the current market situation is initially a strategy of an intraday trader.