Trading plan for the EUR/USD pair for the week of December 6-10. COT (Commitments of Traders) report. The week ended with 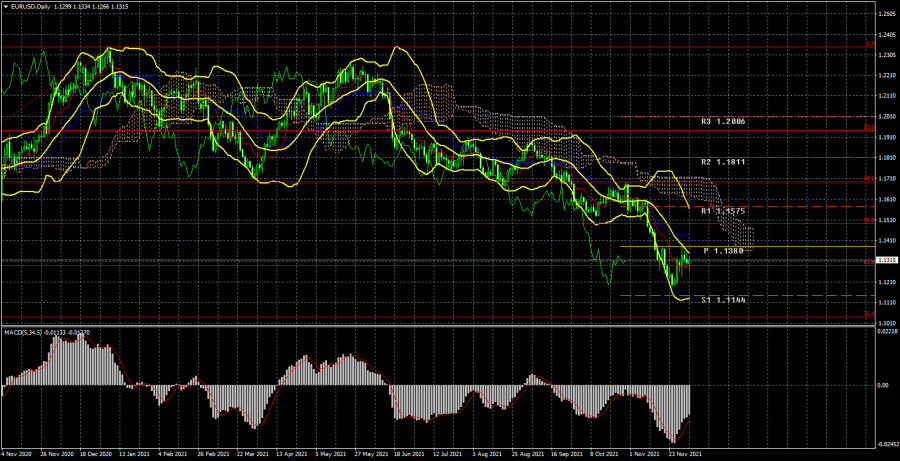 The EUR/USD currency pair has increased by 10 points during the current week. No, this pair has not been in the range of 30 trading points all week, it's just that the movements during the week were not strong and multidirectional. Thus, in technical terms, nothing has changed much in the last 5 trading days. The pair is still in the framework of a new round of upward correction, which has little chance of becoming the beginning of a new upward trend. However, as we can see, traders are in no hurry to buy the European currency and it seems that the technical picture will not change too much before the next Fed meeting. There were several rather important events this week (they will be discussed below), but the most important is still the performance of Jerome Powell, and it all ended with Nonfarm on Friday, which turned out to be very weak. In total, 210 thousand jobs were created in November, with a forecast of 550 thousand. What follows from this? It follows from this that the chances of accelerating the curtailment of the incentive program in December decreased slightly. And this means that the dollar is losing good reasons to continue its growth right now. The Fed has repeatedly stated that the main goal is to restore the labor market to the levels observed before the pandemic. However, recently, the Fed has been under enormous pressure due to high inflation, which is not going to stop. Consequently, the Fed is currently caught between two fires. On the one hand, it is necessary to tighten to slow down inflation, which has already exceeded 30-year highs. On the other hand, the labor market still needs stimulus to continue to recover. Especially now, when the fourth "wave" of the pandemic has covered the whole world, and another, new strain of the "coronavirus" "omicron" has appeared, which can aggravate the epidemiological situation around the world. And the worse things get in terms of the epidemic, the worse things will get in terms of the economy. 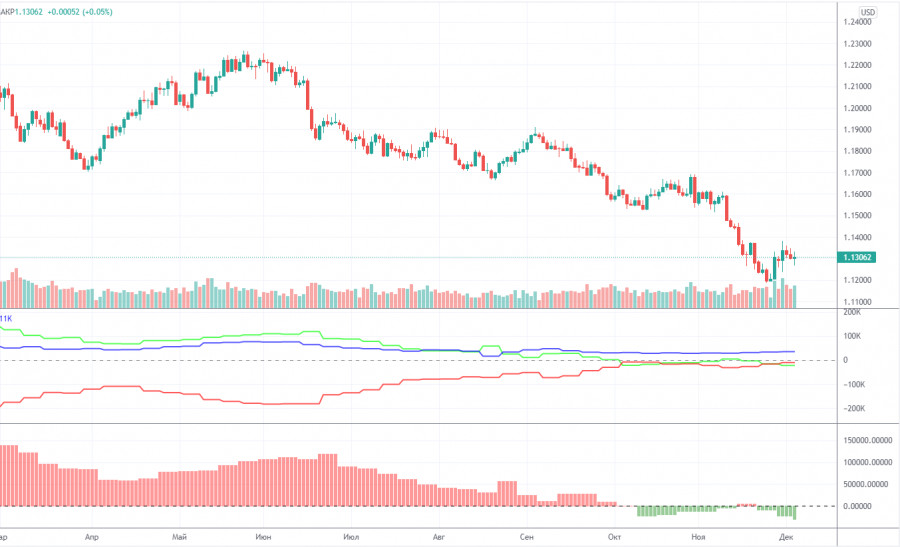 During the last reporting week (November 29 - December 3), the mood of non-commercial traders became more "bearish" again. Judging by the indicators in the illustration above, the changes are not so big anymore, but still, most professional traders continue to either increase shorts or reduce longs. During the reporting week, the Non-commercial group closed 15,000 buy contracts and 8.5 thousand sell contracts. Thus, their net position decreased by 6.5 thousand contracts. Indeed, a little. The green line of the first indicator has been near the zero level for a long time. And this, by and large, means that the number of open longs and shorts for non-commercial traders is approximately the same. And this, in turn, means that the mood is now more "neutral" than "bearish". But still, almost every week there is an increase in this "weak bearish mood", so now we can conclude that the European currency has excellent chances to continue falling. We just want to remind you about the factor of the market working out the reasons that could bring the dollar so high against the euro. From our point of view, the US currency as a whole continues to grow since the probability of tightening the monetary policy of the Fed is much higher than the probability of tightening the monetary policy of the ECB. Especially now, when EU countries are beginning to close for quarantine and break anti-records on morbidity. However, the dollar has been growing for a very long time, and the Fed has only reduced the QE program by $15 billion and that's it. Thus, the factor of a high probability of tightening the Fed's monetary policy has been worked out several times for a long time.

The current week was as interesting as possible. There were a lot of important events and it was even a little strange that the volatility, in the end, was not very high. The most important event of the week was the speech of Jerome Powell, who finally admitted that it is time to stop calling inflation "temporary", as it continues to grow from month to month. He also said that at the December meeting, the issue of accelerating the pace of curtailing the QE program will be considered, which provoked the strongest movement of this week – by 140 points. However, over the next couple of hours, the euro currency won back most of the losses. Also this week, a report on inflation in the European Union was published, which also continues to grow and is already 4.9% y/y. Christine Lagarde, we recall, has not yet abandoned the interpretation of "temporary inflation". However, all subsequent events had almost no effect on the movement of the euro/dollar pair.

Trading plan for the week of December 6-10:

1) In the 24-hour timeframe, the trend remains downward. At the moment, the quotes remain below the Kijun-sen line, and the markets continue to show that they are not ready to buy the euro currency. Thus, the downward movement may resume with a target of 1.1038 (76.4% Fibonacci). The fundamental background currently supports the further fall of the euro and the growth of the dollar, but we also believe that all factors have been worked out by the market for a long time, so we assume the end of the downward trend.

2) As for purchases of the euro/dollar pair, in the current conditions, they should be considered no earlier than fixing the price above the critical line. And ideally - above the Ichimoku cloud, because the price has already overcome the Kijun-sen several times, but then could not continue moving up. There are a few prerequisites for a new upward trend to begin in the near future. First of all, technical.

Interesting? Write a comment below.
 Trading plan for the EUR/USD pair for the week of December 6-10. COT (Commitments of Traders) report. The week ended with
Forward 
Backward 