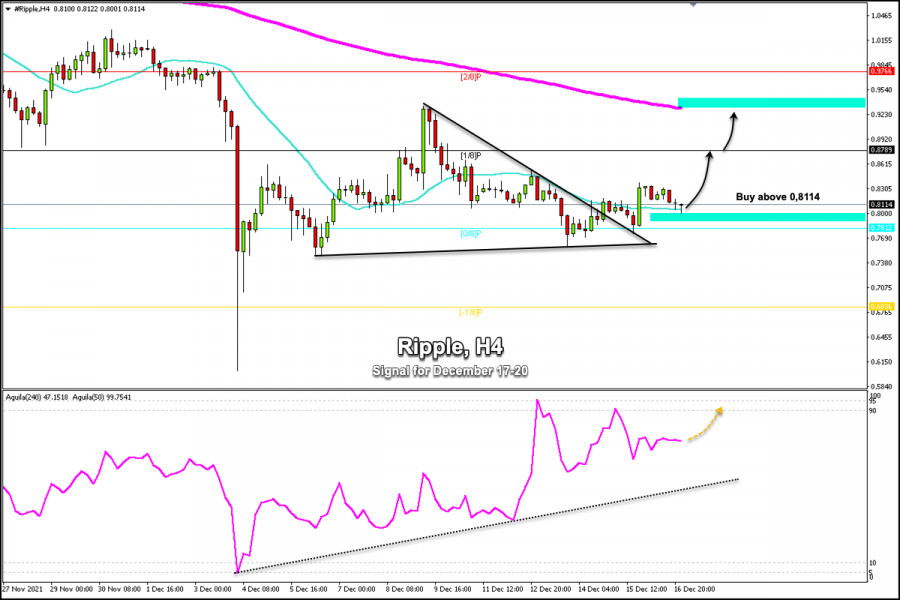 XRP broke above the symmetrical triangle and above the 21 SMA located at 0.8100. Buyers tried to push the price above 0.9230 but failed as the 200 EMA is located in that area which acts as strong resistance.

The eagle indicator is approaching the zone of resistance at 95 point, indicating that it could be reaching overbought levels. A consolidation is highly probable below the 0.93 level that will be followed by a bearish move in the next few days.

If the bulls push the price above 0.9230, XRP could rally towards the psychological level of $ 1.00. There is strong downward pressure in this area and the bears may again pose a tough challenge, pushing XRP lower again. A breakout and close above this level indicate that sellers may be losing control and XRP may go as high as 3/8 at 1.0742.

According to the 4-hour chart, it is observed that XRP is trading above the support of 0/8 of Murray and above the SMA of 21. As long as it remains above 0.7812, there could be a recovery in the next few days towards the zone of 200 EMA.

Our trading plan for the next few hours is to buy XRP while it is trading above 0.7812. On the contrary, if the price closes below this level on the 4-hour chart, we could expect the downtrend to resume towards the support of -1/8 Murray at 0.6836 and towards the psychological level of $0.50.