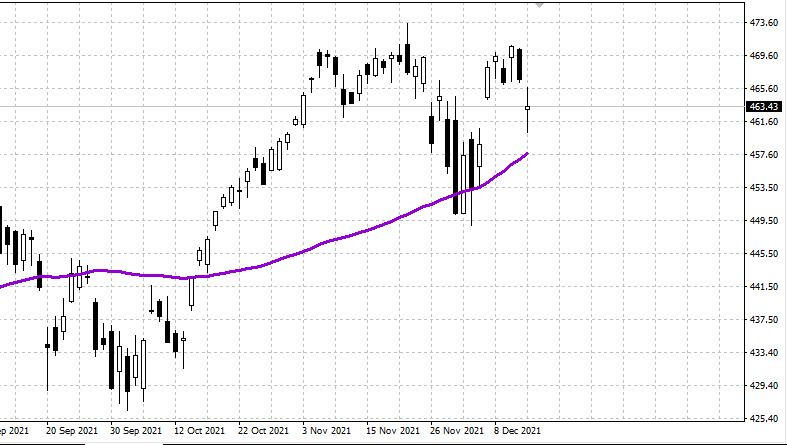 Investors sold off stocks ahead of the Fed's decisions.

Oil falls with the first signs of a US market decline. Brent crude dropped by $2 to $72.80 per barrel yesterday.

Regarding the gas market in Europe, against the background of very high spot prices, around $1,000 per thousand cubic metres of gas, and the winter in Europe, i.e. the heating season, the EU has decided to abandon the long-term gas contracts in the current contract format. The new format of contracts is promised to publish today or in the coming days.

The reason for yesterday's market drop is quite simple. Investors are wary of tough decisions and announcements from the Fed this evening. The reason for that is high inflation. There is even speculation that the Fed might already raise the rate today. However, this is highly doubtful. Another reason is that the market is still near the highs of the year and the Christmas holiday is only 8 days away. Investors are fixing positions. They will only start new buying after a strong market decline, if that happens.

US oil inventories declined by 0.8m barrels over the week.

Demand for aircraft is recovering rapidly after a slump due to the pandemic. Boeing received orders for 109 aircraft in November, following 10 orders in October.

The producer price inflation report showed continued high inflation. Overall prices have risen by 9% over the year. All indications are that Fed policy needs to be tightened.

The retail sales report for November will be released today. They are expected to rise by 1% over the month. But the market will wait for the Fed's decisions first.

Pfizer has announced that its new covid drug Paxlovid has shown 89% efficacy against the new covid strain Omicron. The new pill should be available in the US by the end of this month.

Toyota has announced that it is accelerating work on electric cars. It now plans to produce 3.5 million electric vehicles by 2030.

USDX is trading at 96.40 and is expected to be in the 96.00–97.00 range. The dollar index rose modestly yesterday. However, meetings of the Fed today and the ECB are due tomorrow. If the Fed is expected to tighten its monetary policy stance, it could sharply strengthen the dollar and markedly crash stock markets.

USDCAD is trading at 1.2855 and is expected to be in the 1.2750–1.2950 range. The pair shows high volatility, a new strong rally triggered by falling oil and Fed expectations. The pair could show a new wave of gains amid the Fed meeting.

The market is waiting for the Fed meeting.