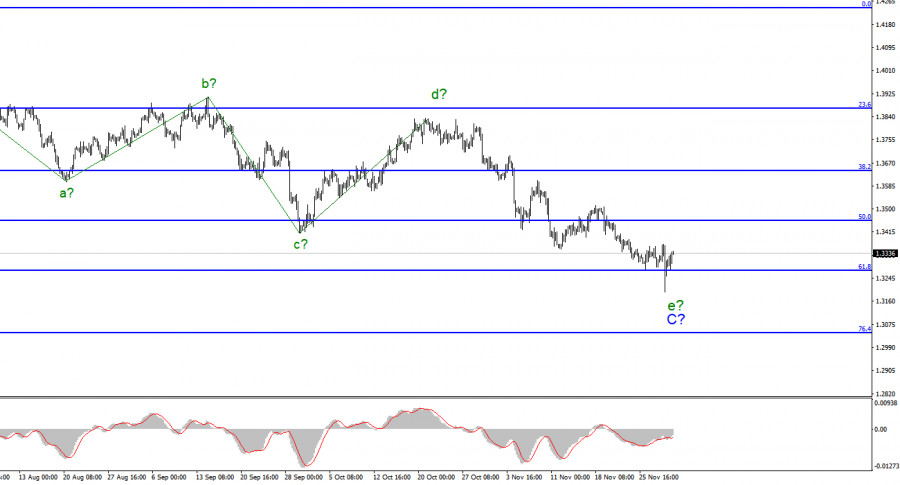 The wave structure of the pound/dollar pair looks quite complex. There are 5 inner subwaves of similar size within Wave C. Since all subwaves in Wave C or A are similar in size, the formation of the last wave (e) could be completed soon (or it could have already been completed). A failed breakout at 1.3271 indicates that the wave has formed as well as the descending section of the trend. Yesterday, however, the instrument plunged, and the attempt to break through 1.3271 was successful. In less than an hour, the pair went up, settling at the 61.8% Fibonacci level. The pair was hovering around this mark on Wednesday and tried to break through 1.3271 twice. Both attempts were unsuccessful, indicating the possibility of upward momentum. However, the price is unlikely to show growth without increased demand for the instrument.

The pound/dollar pair rose by about 60 basis points on Wednesday. Although macroeconomic data in the US came out relatively strong, the market showed no reaction to it, which was also good as the new ascending section of the trend could form. So, as soon as it starts to build up, traders could enter long positions. The ADP Employment Change came at 534K, beating market expectations. The ISM Manufacturing PMI came shy of market estimates but increased from the previous month. In other words, these two important macroeconomic reports could provided support for the greenback but they did not do so. Market players seem to be considering buying the pound in the long term. The greenback has been strengthening for the past one and a half months. So, at least an ascending corrective wave is needed. The pound sterling has strong potential for growth. The formation of a corrective descending section of the trend in 2021 indicates that an impulse ascending section could start to build up. If the Bank of England unexpectedly announces QE taper and a rate hike in the last Board meeting of the year, it will boost the sterling, and the formation of a new ascending section will begin.

The wave structure of the pound/dollar pair looks quite clear at the moment. The formation of Wave (e) could be completed. Since there have been two failed breakouts at 1.3271, traders could consider going long as a new wave section is likely to form soon. Long positions could be opened with the target at 1.3456 (the 50.0% Fibonacci level). 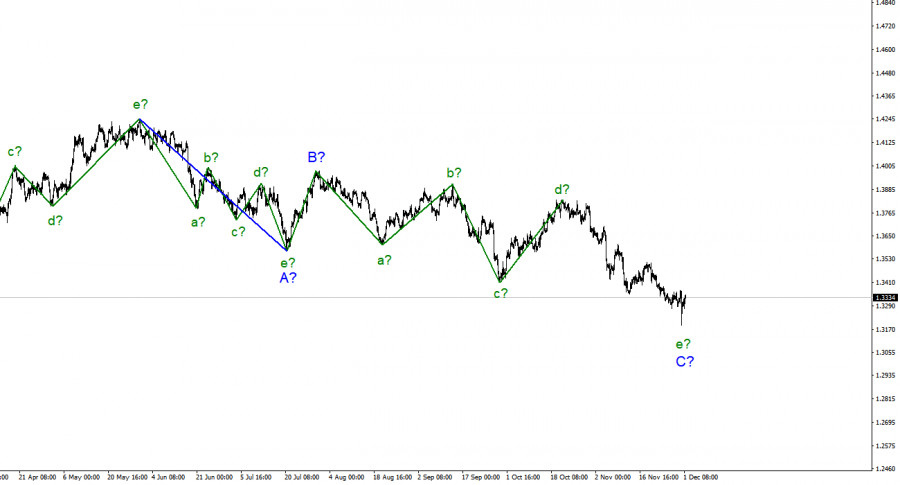 The descending section of the trend has been forming since January 6. This section could be of any size and length. The formation of Wave C could be completed any time soon (or has already been completed). So far, there has been no confirmation of this fact. The entire descending section of the trend may extend, but there have been no signals about it as well.